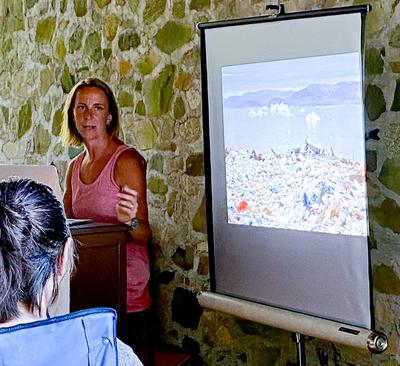 Scientist Abby Barrows (third from left) talks to some of the early arrivals before her talk on micriplastics in the ocean at the Good Life Center on August 7.

“We have some rugged stuff to get through here,” said Abby Barrows by way of beginning her August 7 presentation on microplastics in the ocean and environment at the Good Life Center in Brooksville.

The foreboding language of the marine scientist and researcher’s introduction was swiftly substantiated by evidence. Barrows’ fact-fueled talk included information such as only about 5 percent of post-consumer plastic is actually recycled in the United States (supported by beyondplastics.org) and that at least 8 million tons of plastic enter our oceans annually.

The latter could be a modest statistic, as oceanconservancy.org estimates it at 11 million tons and a quick internet search has other sites putting it at closer to 13 million tons. However many million tons, Barrows stated that plastic will outweigh fish in the ocean by the year 2050 (a supposition supported by the World Economic Forum at www3.weforum.org).

Barrows’ data showed that humans are eating about a half pound of plastic per year and breathing in the same amount. The rate of ingestion is supported by the fact that microplastics can be found in both bottled and tap water, as well as in items such as salt, honey, breast milk and beer.

According to Barrows, “Microplastics are one of the largest pollution problems that you’ve never seen.” She first saw them under a microscope, contained within a half-liter sample of ocean water she’d taken from the Maine coast. The brightly colored strings—“fibers”—that she saw on the slide were microplastics. Microplastics are delineated as primary and secondary. Both refer to pieces of plastic that are “between 1 micron and 5 milliliters in size,” said Barrows.

Barrows stressed that all microplastics are pernicious. “They are non-biodegradable. They release chemicals and they fragment over time, but don’t disappear.” Another statistic from one of her slides: “It’s estimated that half a million tons of plastic from synthetic clothing get into the ocean every year.”

Barrows, a Stonington-bred and -based marine scientist, researcher and oyster farmer, has published numerous peer-reviewed papers on microplastics. She holds a B.S. from the University of Tasmania and a Master of Philosophy in Human Ecology from College of the Atlantic. Her research has taken her to places like Alaska, Antarctica and Indonesia to gather ocean samples for microplastics testing.

“I first heard of microplastics in 2012,” said Barrows, “and a light went off for me.” As Barrows showed videos of her work in action, at one point the screen showed her communicating with her husband and toddler daughter—the family engaged via computer as Barrows was on location far from home at the time. Her comment on this slide: “I don’t want microplastics research to even be a field of research.”

One of the short documentaries Barrows showed centered on her partnership with Adventure Scientists, a Bozeman, Mont. based nonprofit organization. In the video, Barrows states that AS “unites explorers and scientists to solve some of the world’s most pressing environmental issues in which the access to data is crucial to resolving them.” Describing the results of the project, Barrows, who acted as principal investigator for the Global Microplastics Initiative, said, “Through the help of citizen scientists, we compiled one of the largest global datasets on every ocean and continent in the world, enabling a rare glimpse at the extent of plastic contamination in remote, understudied ocean and fresh waters.”

This work was precipitated by a 2015 study Barrows conducted with the Blue Hill-based Shaw Institute whereby they tested levels of microplastics in such species as lobsters, clams, mussels and mackerel. The findings: 96 percent of the analyzed species contained microplastics.

What can we do to mitigate microplastics damage?

Barrows recommends that you start by refusing single use plastic, such as drinking straws, grocery bags, cutlery and water bottles. As for the latter, you’re better off with tap water. While Barrows said that tap water is not microplastics free, it contains, on average, 22 percent less plastic than bottled water. She gleaned this statistic from testing 19 bottled water brands from around the world.

Recycle, but know that “we can’t recycle our way out of this issue…recycling has been put forward as ‘the answer,’ but it’s a ‘feel good’ thing, not necessarily a good thing,” said Barrows.

Products that can help on a household level include the Cora Ball and the Guppy Friend. Both filter and reduce fiber shedding from clothing when laundering. Inventions such as the Sea Bin and Waste Shark have potential to help clean ocean waters, but as for the future, “complex problems usually need complex solutions…make less, use less: then we really will have less of a problem,” said Barrows, adding that there needs to be more responsibility put on the producers rather than the bulk of it falling to the consumers.

“Make changes that are relevant to your area….Think globally, collaborate globally, act locally.”