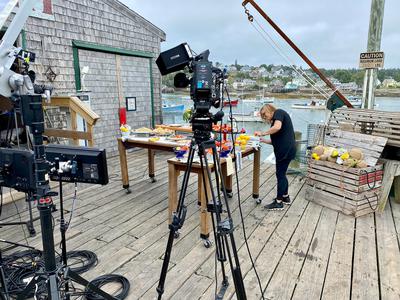 QVC scenic stylist Beth Malone works on a table set-up for the August 24 segment on Greenhead Lobster in Stonington.

by Gail O’Brien and Maggie White

“I love lobster, first of all, and this is a part of the country I’ve never been to. In the spirit of exploration of our beautiful country, I am happy to be here,” said Jayne Brown, program host of the West Chester, Pennsylvania-based QVC television network. “Hugh is a doll, too. I love him,” added Brown.

Brown was in Maine August 22-25, along with a crew of roughly 16 people, to shoot a remote production featuring lobster tails from Greenhead Lobster in Stonington. The “Hugh” to whom Brown is referring is Hugh Reynolds, Greenhead owner and operator for the past 25 years.

The Stonington-featured segment aired on QVC intermittently for 24 hours spanning August 24 and 25, selling bulk quantities of lobster tails at a limited-time discounted rate to viewers. Though part of a four-part series—the other three products and locations being touted included Farmer Jon’s Popcorn in Breda, Iowa, Corky’s Burnt Ends in Memphis, Tenn., and Enstrom Toffee in Grand Junction, Colo.—the Maine program had particular status in that it was what the crew referred to as “TSV.”

In QVC parlance, “TSV” is “today’s special value” and it means that not only does Greenhead Lobster enjoy more airtime, but also has the status of being “the star of the month” according to QVC senior culinary brand stylist Bonne DiTomo, who is a 20-year veteran in the industry. “It’s the biggest sale in this highlighted series,” added associate producer Ebony Roberts, who also said that Greenhead Lobster was selected due to Reynolds being one of the “top food vendors” featured on QVC as his lobster has earned him the program’s “Best Seafood” award multiple times.

From the docks to the screen

When Reynolds started working with QVC a few years ago, he wasn’t keen to be on screen. “I was super nervous. But Jayne broke me. She asked me what lobster tastes like and I froze. I had no idea how to explain that at first,” said Reynolds with a laugh. “Now I know exactly how to describe it: Lobster tastes like Stonington.”

Bringing Maine to the masses

“We’re just giving people inspiration for how to prepare the tails at home,” said JDish of the curated plates. “This is the perfect backdrop,” he added, gesturing to Stonington Harbor behind the set, “to be able to sell a product that comes from right there.”

During her opening on-air segment, Brown addressed viewers by saying, “This is an active, working dock. It’s so gorgeous here. We’re bringing Maine right to you, ladies.” (The invocation of “ladies” can be explained by a pymnts.com statistic that QVC’s target customer demographic is a woman between the ages of 35 and 64 and by starngage.com’s ratio of female-to-male QVC followers as 76.8 percent to 23.2 percent.)

Indeed, they are bringing lobster tails to the masses. DiTomo estimates the QVC viewership at around 90 million and Jayne Brown alone has 81,000 Instagram followers.

Greenhead Lobster comprises their dockside headquarters in Stonington Harbor, other buying stations on the Island and their processing facility in Bucksport. For more information, visit greenheadlobster.com. 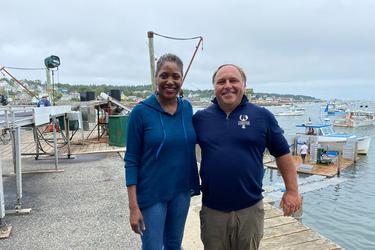 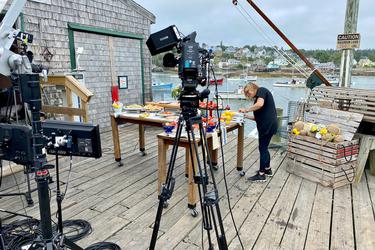 QVC scenic stylist Beth Malone works on a table set-up for the August 24 segment on Greenhead Lobster in Stonington. 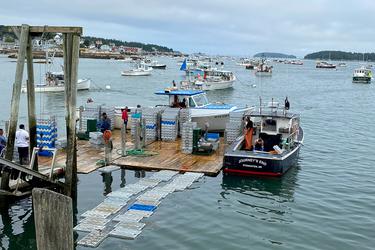 Working dock at the Stonington headquarters of Greenhead Lobster. 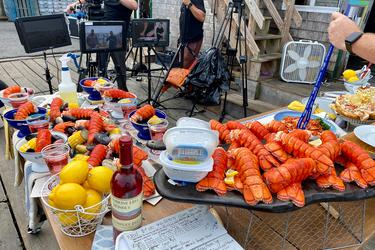 Lobster tails styled by QVC at Greenhead Lobster and host notes for the August 24 television shoot.