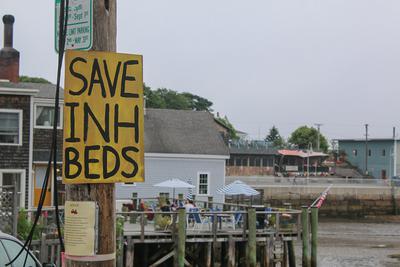 Local wishes on display—yet some bed rights have been sold.

The Island Nursing Home board has agreed to sell two-thirds of its bed rights for $700,000, leaving licenses for approximately 18 skilled-nursing beds or 36 residential care beds, or a smaller combination of each, according to spokesman Dan Cashman.

The board made the decision on September 8 and announced it in a news release on September 13. The vote was unanimous, with one new board member abstaining, Cashman said.

“Island Nursing Home closed its doors just about a year ago,” INH Board President Leon Weed said in the statement. “The issue at the time was staffing and housing for staff, and the issues remain. If Island Nursing Home is going to reopen in any capacity, it will have to be with fewer beds, and a smaller staff.”

Reaction to the news was swift, negative and often profane.

“I cannot believe it,” he said.

Deer Isle Town Manager Jim Fisher said the choice to sell the bed rights seems disconnected from the community. “They’re not listening to the people,” he said. “There’s wisdom in what people are asking them to do or not do. They think they know, but they should be a bit more humble.”

Cashman, however, said selling the bed rights gives the INH board a shot at reopening the nursing home. “If the bed rights expired and no revenue came in from communities, the facility would be forced to close permanently,” he said in a phone interview.

INH made the deal with Northern Maine Medical Center in Fort Kent, Cashman said. The bed rights are worth $2 million, he said.

INH board member Bill Cohen said the state doesn’t license individual beds, it licenses payments from MaineCare. What INH sold was the right to get money from MaineCare, he said.

Cashman said NMMC is building a new facility with the same number of beds, but the cost per bed will increase. By buying INH’s bed licenses, NMMC gets the right to ask MaineCare for up to $2 million more than what it is getting for patients in the current facility.

INH negotiated the $700,000 sale price, or 35 percent of anticipated revenue, Cashman said. “Over the past five years, bed rights sales have ranged from 10 percent to 30 percent factors, so the 35 percent factor is on the high end,” he said.

Cohen said the state has been very clear that INH has flexibility with the remaining $1.1 million in revenue. “We can do a combination of skilled and residential beds, or all one, all the other, or some combination,” he said in a phone interview.

Fisher said the nursing home’s staffing scenario showed it could only break even if it ran at full capacity with all of its beds—38 skilled and 32 residential.

Stonington Town Manager Kathleen Billings called it “putting out your traps and then selling your boat.”

Town officials said they felt the INH board had deceived them about the sale of the bed rights. Board members, primarily treasurer Skip Greenlaw, visited six town select boards within the past month to discuss reopening the nursing home.

On August 21, shortly after nearly 1,600 island and peninsula residents signed a petition opposing the sale of the bed licenses, Greenlaw met with the Stonington select board.

“We understand there is widespread opposition to selling the bed rights,” he told the board. To avoid that outcome, Greenlaw proposed the towns reimburse INH $700,000 and help find staff. He also wanted 10 units of workforce housing from each town.

Four days later, he made the same request to the Deer Isle select board, then to select boards in Brooksville, Brooklin, Blue Hill and Sedgwick.

Perez said he believed INH intended to sell the bed rights all along.

“They seem like they came to that meeting in bad faith, didn’t give the townspeople time to even process,” Fifield said in a phone interview. “It wasn’t even like a formal request.”

Local towns are just now beginning their annual budget process, which culminates when voters approve spending in the spring. Towns can decide to spend more money than authorized at town meeting by holding special town meetings. Third-party requests, like the INH board’s, must be made formally with supporting documentation.

When Greenlaw requested money from the Stonington select board, Fifield said, “he shot from the hip.”

Even after selling the bed licenses, INH will still likely need money from local communities if it reopens the nursing home, Cashman said.

Billings said she doesn’t think the INH board can reopen the nursing home by the state’s deadline of February 23, 2023.

“We had the ability and the hope to do it,” she said in a phone interview. “Those old people who were hoping to go back got thrown out the damn door. I’ve never seen such a disgusting unraveling of a nonprofit.”

She said INH still hasn’t revealed a plan. “Why don’t they have a nursing home administrator and what happened to all their money?” she said. “And do they think the townspeople are giving them beaucoup bucks?”

Perez questioned why the INH board requires $700,000 in the first place. “Why do they need that kind of money?” he said, though he noted the board has retained an attorney and a public relations firm.

Shortly after the news broke that INH sold the bed rights, Perez said two people told him, “I hope the town doesn’t give the nursing home one f-ing cent.”

Deer Isle town officials are also eyeing INH’s tax exemption, Perez said. If INH isn’t fulfilling its mission according to its bylaws on April 1, the town could conceivably send the board a tax bill.

“They might want to consider selling the rest of the beds to pay the taxes,” Perez said.