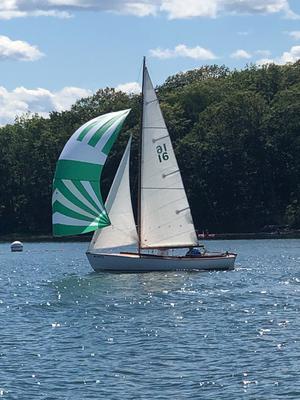 Caroline B under spinnaker winning the July 4 Robinson Cup race.

At the Castine Yacht Club awards ceremony on August 27, race committee chairman David Bicks described the Castine Class as “the lifeblood of the Castine harbor,” according to a press release. From 1951 to 1964, Eaton Boatyard built 20 of these wood-planked 18-foot sloops designed by Mace Eaton. Commodore Tom Ashton noted that Castine is unique in having its own locally built and designed class of sailboats.