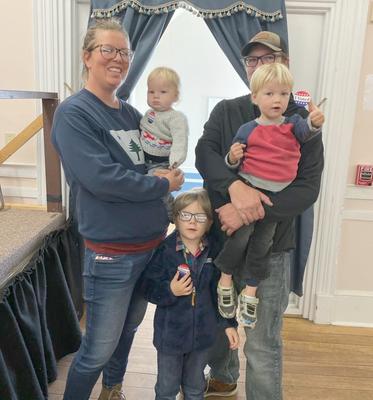 Nina Milliken, Democratic candidate for the Maine House of Representatives, District 16, visits the Blue Hill polls with her husband, Jesse Wessel, and three sons on November 8.

“I want to hear people’s feedback and frustrations. And I want to hear if I’ve pissed you off, too,” says Nina Milliken, a Democrat who was elected during the November midterms as House Representative for District 16.

Milliken is a teacher, though she left the profession in June (she still teaches Spanish on a part-time basis). In addition to her new political role, she is a Blue Hill School Board member and a mother to three young boys. She had her third child in November 2021 and decided to run for representative in January 2022.

“My husband thinks I’m crazy,” said Milliken, who said that she feels she has ample time and energy to tackle all that is on her plate. Her can-do attitude was on display on the election trail.

“For the first several months, I had a baby attached to me while campaigning—we called him my campaign manager,” she joked.

Maybe the little one didn’t manage, per se, but Milliken’s schedule was dictated by that of her sons. She went door to door during nap time, the boys sleeping in the back seat of her minivan while she connected with voters.

At one point, Milliken recalled with a smile, the plan she articulated to her peers was that she would be the “second female president of the United States after Hillary Clinton.” While her political aspirations remain, she’s come to realize that she prefers being a part of a legislative body.

“It’s kind of like singing in the choir versus being a solo act. I like playing a team sport. It’s not that I lack confidence to do it [alone], it’s just not the game I want to play,” she said about being president.

While she always wanted to go into politics, it was an unexpected loss that inspired her to make the leap. “My dad died suddenly in 2018, and it pushed me a bit to be like, ‘if you want to do it, just do it,’” said Milliken, who added, “I’d been kind of waiting to give myself more validity in the political arena, but the truth is that people less qualified than myself are running for much more powerful positions in the Maine Legislature.”

She attributed some of her initial hesitation to gender. “Women are taught to be much more questioning of our qualifications in the political arena because we haven’t historically had a place at the table.”

Following in the footsteps of such leaders as Gov. Janet Mills and Rep. Rachel Talbot Ross (currently running for Speaker of the House), Milliken completed the EMERGE program, a training geared towards female Democrats with the intention of helping them run successful campaigns.

“EMERGE provided a lot of social capital, it provides women with a social and political support system,” said Milliken, whose political fate was sealed when she learned that Sarah Pebworth wasn’t seeking reelection and she thus decided to throw her hat in the ring.

Moving forward, Milliken plans to make headway on the issues central to her campaign: childcare, affordable housing, women’s rights and the opioid crises. Regarding childcare, “that’s a selfish one,” said Milliken, “but we are, I believe, in what is considered a childcare desert on the Peninsula.”

The problem is multifaceted, according to Milliken, who cited a lack of staff (in part due to the dearth of affordable housing) and a lack of viable buildings.

“There are folks who want to open childcare facilities, but there aren’t buildings that meet all the standards. The cost of building something is astronomically high. And then the overhead relative to the costs of [childcare operations]…it’s just not a profitable industry.”

As for the lack of housing, “Airbnb is a huge issue…it drives out anyone who can’t afford to buy a house.”

Milliken is sympathetic—she and her husband bought a house in foreclosure in June 2020 and, after doing much research, found there was both more money and more security in renting it short-term rather than long-term. They wound up doing a long-term rent-to-own and sold the house to their tenants.

When it comes to women’s rights, Milliken plans to fight for continued access to abortion care. “I would love to see that listed as a right on the Maine State constitution,” said Milliken, who worked from 2011 to 2014 in Ellsworth as a sexual assault educator, doing advocacy work across Washington and Hancock counties. She reported that she has donated half of the funds remaining in her campaign account to Mabel Wadsworth Center, a nonprofit women’s health center in Bangor.

As for the opioid crisis, Milliken trained more than 100 people on Narcan this past summer and pushed to have Narcan available at Blue Hill Consolidated School. “That happened on my birthday; it was all I wanted as a present,” she said.

Regarding the political climate, Milliken is optimistic. “I hope we’re turning a corner of how divisive politics has become. I knocked on about 1,000 doors and had only one slammed in my face. People are respectful, even people who are opposed to me because of my liberal political agenda,” said Milliken. “I want to be really transparent. I want people to call me or come up and talk to me when they see me.”

Milliken can be reached at 412-8828 and ninamilliken@gmail.com.