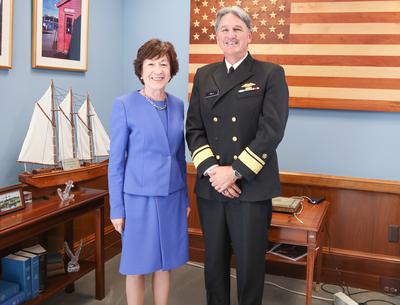 During their meeting, Collins and Paul spoke about some of the shoreside infrastructure improvements that are needed in preparation for MMA to receive its new training vessel, according to a press release. Paul also shared his plans to increase collaboration with the University of Maine and Maine’s community college system.

“I enjoyed meeting with President Paul again to discuss his vision for the future of MMA and his plans to build on the world-class curriculum that MMA offers,” said Collins. “As the new president and proud graduate of MMA, I know Jerry is as eager as I am to see a new training vessel delivered in 24 months. As a leader of the Transportation Appropriations Subcommittee, I look forward to continuing to work with Jerry and support MMA’s mission to help the next generation of students to excel in the maritime industry and a variety of other valuable trades.”

In 2019, Collins secured $300 million for the construction and acquisition of a new training vessel for MMA to replace the college’s existing training ship that is nearing the end of its serviceable life. This ship is used to provide rigorous instruction and crucial maritime training, and it is indispensable for preparing students to excel in the Navy, the Coast Guard and the maritime industry.

Earlier this year, Collins successfully reversed a U.S. Department of Transportation proposal to designate the home port for MMA’s ship as Norfolk, Va. As a result, the training vessel, the State of Maine, will proudly bear the designation of Castine, Maine, as its home port.

Paul graduated from MMA in 1989 and became the college’s 15th president this May.