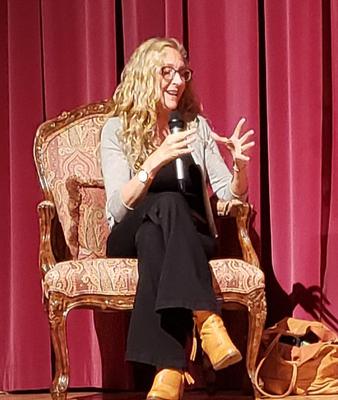 The 2022 Word literary festival kicked off on Thursday, October 20, with a poetry reading at the Cynthia Winings Gallery in Blue Hill. Attendees were encouraged to mingle and enjoy the Word-inspired art adorning the walls of the barn-turned-gallery before two of the featured poets—Beatrix Gates and William Rand—shared their work.

After reading several poems, Rand added levity to evening’s coda when he asked the crowd if they’d like to hear more. Murmurs of enthusiasm prompted him to riffle through his book, stop on a random page and proclaim, “Oh, look! A William Rand poem.”

And so, the first event of the festival’s seventh year closed to the sound of audience laughter.

Behind the scenes at Word

The brain-child of Sarah Pebworth, state senate representative and former owner of The Blue Hill Inn, Word is organized annually by a committee of eight to 10 community members. They operate under the nonprofit umbrella of Blue Hill Community Development, are funded by the Stephen and Tabitha King Foundation, the Anahata Foundation, the Lojo Foundation, Bar Harbor Bank & Trust and the Maine Arts Commission as well as through community support and private donations.

The festival, which spanned four days, offered a mix of day and evening activities, free speaker events and ticketed workshops in various Blue Hill locations. This year’s keynote speakers—Lily King, Phuc Tran and Liza Donnelly—were presented “in conversation” with an interviewer, an informal format that also allowed for audience questions.

“The three were all remarkably good. People commented to me afterwards that they were exceptionally comfortable conversations,” said committee member and author Ellen Booraem.

Something Pebworth, Booraem and Samantha Haskell (a fellow committee member and proprietor of Blue Hill Books) remarked upon was the presence of festival-featured authors and artists at events they were not headlining.

“We have really generous talent in that a number of them stay for the weekend and attend multiple events,” said Pebworth. “There’s this overlap that really deepens the conversation for everyone…and there is this amazing access to an author who some people adore.” (For more on keynote speakers, see next page, “Lily King has her themes.”)

A literary and creative mix

In addition to the keynote interviews, there were writing workshops, children’s events, hands-on crafts and a poetry series. “I like the idea of balancing literary events and more practical events,” said Booraem. “People want both.”

She cited “The Wide World of Publishing Panel” as an example of a practical event. “The panel was fantastic. There was a great array of material and it left people with really useful take-away information.”

Pebworth, who believes herself to be “the least literary and the most crafty” of the committee members, loved overseeing the “Book Making for All Ages” workshop. “There are so many sweet little moments. Seeing kids and paper and patient instructors…it just made me happy.”

According to Marie Epply, the committee’s co-organizer of poetry events, “the poetry was as diverse as the poets’ backgrounds and voices, but they shared a singular commitment and talent for truth-telling, for reaching into the hearts of the audience, inspiring hope and a collective will capable of creating an ever increasing, compassionate future.”

While repeat events are rare, the day-long song crafting workshop with Noel Paul Stookey and George Emlen sold out quickly for the second year running. Equally well-attended was Sunday’s performance of Time Ago: Mary Ellen Chase Remembers, a play in four scenes by Bundy Boit.

For this collaboration with the Blue Hill Historical Society and the New Surry Theater, “I don’t think there was an empty seat in the Blue Hill Town Hall auditorium. It was so charming to see little kids in a play,” said Pebworth.

Moving forward, the committee will tweak as needed. “In order to fit everything in we have to triple book certain times frames. We are a committee and community who write and love authors and we want to do everything. So we struggle with that,” said Pebworth.

Booraem said that offering remote options for people who might not be able to be physically present is also a consideration. “An interesting thing about the pandemic is that it showed there was an advantage to having things available by Zoom. The question is how to do [hybrid offerings] in a way that is satisfying to both audiences,” she said.

They plan to continue balancing homegrown writers and artists with those “from away.” “We want to give Maine talent as much exposure as we can. But we’re also committed to diversity and that’s not always possible with Maine writers,” said Booraem.

“We’re going to keep it fresh,” added Haskell. “We really appreciate the support we get from the community and we want to be a community oriented-festival…we are very open to feedback.” 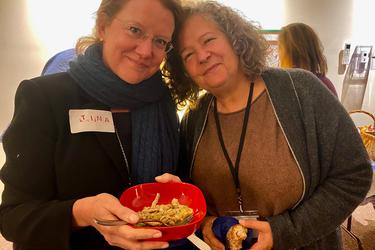 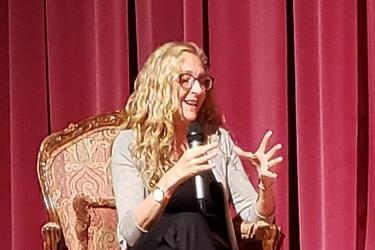 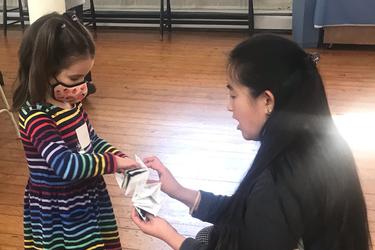 Bea Tran, daughter of memoirist Phuc Tran, shows off her bracelet during the Word festival on October 20. 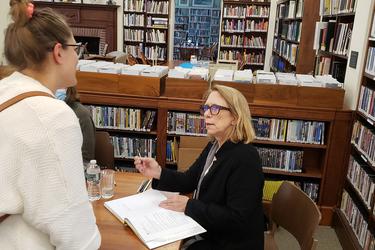