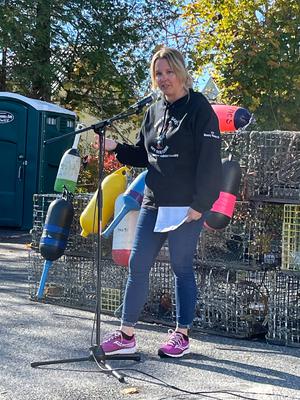 More than 300 fishermen, family members and friends thronged the Stonington Fish Pier on Sunday, October 30, to show their support for the besieged lobster industry. While contentious lawsuits and an economic boycott darken the horizon for lobstermen, the unseasonably warm, sunny day better reflected the optimism of rally organizers and attendees.

“I could not be more proud of my community,” said Melissa Jones Bayley, who co-planned the event with Jill Larrabee. “Our goal was to empower the community and our fishermen. People already have so much going on, but our message was that each person has the power to make change.”

The rally included a speaker’s list of local fishermen, state and local officials and regulatory experts; food and merchandise vendors who donated a share of the day’s proceeds; and entertainment from three bands—Along for the Ride, the Returnables and 3 Mile Line. Children danced to the music and drew murals with thick chalk pieces on the pier’s paved surface while their parents discussed next steps in the fight to secure their futures.

“We will figure out how to do this for our children and our grandchildren,” lobsterman John Williams said. “We’re not doing this for us—we’re doing it for them.”

Although the final tally was not available at press time, Bayley said the event had raised about $5,000 through raffles, donations and the support of vendors and local merchants. Bayley explained that money will be used to support ongoing legal challenges to proposed federal regulations, primarily by the Maine Lobstermen’s Association and the Maine Lobstering Union.

Currently, the groups, joined by the state, are fighting a legal battle on two fronts—one challenging the arbitrary use of data about North Atlantic right whale location and population, the other disputing the timing and scope of whale-protection rules that would severely limit, and perhaps shut down, the lobster fishery.

As important as the fundraising is for the legal fights, Bayley said the event’s capacity for awareness-raising might prove even more beneficial. She felt it is important to win in the court of public opinion, too.

“The national news has made us out to be monsters,” she said, referring to charges that Maine lobstering is unsustainable and contributes to the death of endangered North Atlantic right whales. “But we can change minds. We can show the country that we’re doing everything right and that our industry doesn’t deserve to be red-listed.”

“We can’t win if the industry is split,” he said, having announced earlier in the week that his department was now “cautiously optimistic” about new developments in the legal, legislative and regulatory arenas (see accompanying article for more details). “We need to stick together.”

Keliher said the state is committed to fighting the proposed federal rules with every tool at its disposal, including hiring lobbyists and lawyers who have waged similar battles “on both coasts.”

Dustin Delano, vice president of the Maine Lobstermen’s Association, called the current environment “one of the scariest times we’ve ever seen” and said communities like Stonington face an existential threat. But, he added, “we all come together, and we will all stay together, until we reach victory.”

Ginny Olsen, political liaison of the Maine Lobstering Union, sounded a similar note. “As fishermen, we were not built to break,” she said, “and we will not quit.”

Stonington Town Manager Kathleen Billings warned that if the lobster fishery is shut down, “we will lose $60 million to our economy and suffer the loss of hundreds, if not thousands, of jobs” on the Island and neighboring communities. Citing what she called “brutal federal overreach,” Billings outlined the town’s multi-pronged responses and urged state officials to “preserve this fishing industry at all costs.”

“We need to stand together on this,” she concluded. “We need to fight this to the bitter end.”

Olsen said that it was imperative that the government use updated science when assessing the right whale population and transit through the North Atlantic. Instead of relying on mathematical models that employ probabilities instead of hard data, she said the National Oceanic and Atmospheric Administration should track copepods (the main food source for right whales), place tagging devices on the whales themselves and use satellites to better understand migratory patterns.

Another speaker, former teacher and actor Robert Burke of Blue Hill, argued that data from the National Marine Fisheries Service (a division of NOAA) undermined its assertion that the right whale was endangered or in decline.

Its stock assessment reports (SARs) from 2007 to 2021, he said, show that the right whale population in the North Atlantic has grown from around 500 individuals to 696 when “double entries” and “phantom mortalities” are excluded from the count.

That number grows to 716 in 2022, Burke said, because no mortalities and 20 newborn calves have been recorded so far this year. He also noted that there are an additional 15,000 right whales in the Atlantic south of the equator.

“No one can prove it’s a different species,” he said, “because it just isn’t true.”

For its part, NMFS estimates that there are about 350 right whales in the North Atlantic today.

Stonington resident and former DMR Commissioner Robin Alden also weighed in on the science. “I’ve been in a lot of [legal] fights over the last 50 years,” she said, drawing on written comments she submitted to NOAA, “but I have never seen a travesty like this.”

Her comments (see page 6) criticized the current scientific process for its “numerous flaws” and reliance on paper exercises rather than actual “monitoring and transparent reporting,” which might lead to greater trust and cooperation between regulators and fishermen.

“The actions being explored to reduce risk by 90 percent threaten to unravel the socio-economic balance that has enabled the Maine lobster fishery to be the economic and social engine it has been over the last 40 years,” Alden wrote.

“We’re in the fight of our lives,” said former U.S. Congressman Bruce Poliquin, the Republican nominee seeking a return to Maine’s 2nd Congressional District seat. “NOAA is a federal agency that is trying to impose punitive regulations that are not based on science.”

He proposed that Congress defund “the part of NOAA that’s trying to enforce the proposed regulations.” He also suggested that Maine take its cue from West Virginia, which mounted a successful Supreme Court challenge to an Environmental Protection Agency decision on carbon emissions earlier this year.

In that case, the majority ruled that when a regulatory agency make a decision of “political and economic significance,” the agency must “point to ‘clear congressional authorization’ for the power it claims.”

In a rare point of bipartisan alignment, Golden also sponsored a similar bill that would have denied NOAA funding for the data tool it created to model and assess the right whale population. 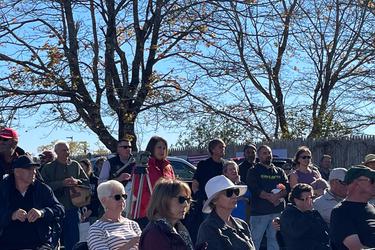 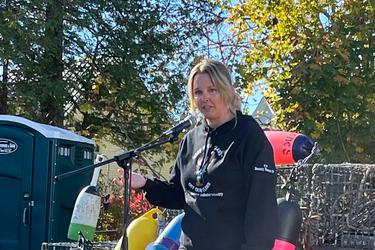 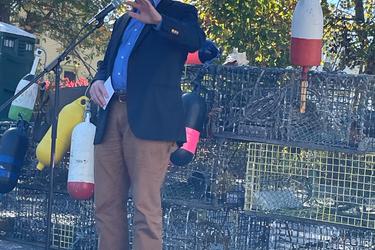 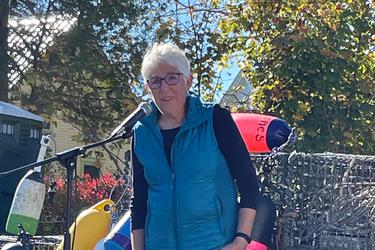