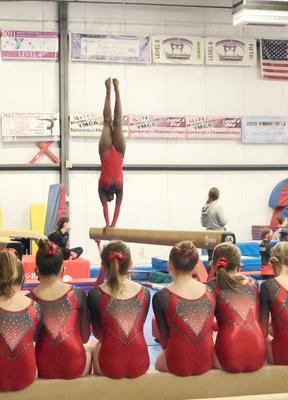 A Deer Isle-Stonington elementary school student took to the podium last month when she won first place all-around for her age and competition level (3N, Senior B) in a National Gymnastics Association State Meet held in Ellsworth. Eleven-year-old Mitike Koch’s total score for the four events she competed was a 36.95 (breakdown: 9.45 on vault, 9.3 on both floor and bars and 8.9 on beam). The highest possible score on any one event is a 10. Koch’s performance was near-flawless.

When asked about her favorite event, Koch said, “I like floor the most because you can’t fall off of anything. They take points off when you fall. And I also like it because you can dance and choose your own music. You can choose music that fits your personality. My floor music is called ‘Cuban Sass.’”

As for how this decorated athlete got her start in the sport, Koch’s mother, Julie Morringello, recalls a young Mitike doing cartwheels all over the house starting at age 4 or 5. “Like, I did cartwheels all the time! And I walked on my hands.” chimes in Koch with enthusiasm.

She was inspired to start taking formal gymnastics classes both because of a cheer clinic she attended and because a friend of hers was going to be participating. In fact, it is the social aspect of the sport that Koch enjoys the most.

“I like meeting new friends, since there are people from Ellsworth and other places,” she said. “I like the travel, we’re going to Rhode Island, and we went to Portland. In Portland, we all went to the mall. I get to be with my friends in new places—to get to know them in other ways.”

Camaraderie is indeed a theme for Koch, something that is further evidenced by her response to a question about how she handles pre-meet jitters. “I get nervous, but according to my mom, I don’t show it. And I’m with my friends, and we all help each other out.”

As for next steps in the sport, Koch will be busy this summer learning a kip on the bars—that’s the only skill she has yet to master in order to “level up” and compete next year at Level 4.

As for pushing herself, Koch shared that earlier that day, she’d been able to complete a front handspring-front tuck for the first time, after many attempts (“I fell a lot!”). She said, “It’s a really nice feeling when you get a [new] skill. At tumbling class, they videotape us, so you can see what you’re doing wrong. Then, once you get it, you think it was really easy.”

When asked what advice she’d offer to other and future gymnasts, Koch said, “Don’t give up, since it gets really hard. Don’t compare yourself to other people. You’ll get that skill.”

Koch practices gymnastics at Springers Gym in Ellsworth and takes tumbling classes at Island Cheer and Tumbling on Deer Isle.