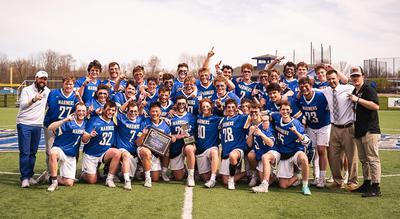 Maine Maritime men’s lacrosse beat SUNY Canton 21-18 in the North Atlantic Conference Championship matchup on Sunday afternoon, May 1, to advance to the NCAA tournament, according to a press release.

The Mariners opened up the scoring with a goal from Sam Nichol (Concord, N.H). The Kangaroos responded with two goals of their own, before Jayden Wilson (Lewiston, Maine) tied the game at 2-2 off a pass from Zeke Tocci (Naples, Maine) with 8:49 left in the first. Canton then scored five unanswered goals, until Tocci scored his first goal of the game. Canton scored the next three goals, taking a 10-3 lead, two minutes into the second quarter. The Mariners answered when Brendan Reddington (Wallingford, Conn.) found Wilson for his second goal of the game, before the Kangaroos scored again to make the score 11-4. Alex Stevens (South Portland, Maine) scored four goals in the second quarter, including a man-up one, to spark a five-goal run of their own, along with a goal from Jacob Belanger (Brunswick, Maine) to cut Canton’s lead to 11-9. Canton answered with a goal prior to halftime to make the score 12-9.

The Kangaroos opened up the second half with a goal, extending their lead to four and Wilson responded for the Mariners with an unassisted goal. SUNY Canton scored two more goals, until Nichol and Wilson, assisted by Chandler Coombs (Brunswick, Maine) each scored a goal to cut the Kangaroos lead to three. SUNY Canton scored one more time in the third, before Nichol scored his third goal of the game and Stevens scored a man-up goal, assisted by Ian Haines (Cape Elizabeth, Maine), to make the score 16-14 going into the fourth. The Kangaroos started the fourth with a goal, before Nichol scored back-to-back goals and Stevens found the back of the net off a pass from Wilson to tie the game up at 17-17. SUNY Canton scored one more time before the Mariners buried them, scoring four consecutive goals, two from Wilson and one each from Nichol and Stevens, to make the score 21-18 and win the NAC Championship. The Mariners now advance to the 2022 NCAA National Championship tournament.