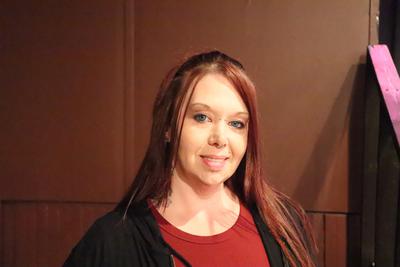 Wendy Allen at the Opera House in Stonington where she talked about her journey from addiction to recovery.

“It took me 42 years of living to dare to dream,” Wendy Allen told a rapt audience of 25 at the Opera House on Saturday, April 30. Until then, just about the only future she could ever remember imagining was one that ended in a lethal overdose of heroin.

Allen spent an hour telling her life story—of neglect, abuse, addiction, prison and, ultimately, recovery—a tale of tragedy, luck, survival and redemption. The event was sponsored by Opera House Arts along with Maine Speaks and the Maine Humanities Council. Allen titles her talk, “What if I dared to dream?”

Today, Allen is an accomplished public speaker and activist who works with nonprofits and state legislators drafting policies related to substance abuse disorder, prison reform and all forms of harm reduction surrounding the “drug apocalypse” facing Maine and the country. But, for a long time, life was anything but bright for the 42-year-old mother of four.

She recalls wanting to be a singer like her mother, but that dream disappeared when she was kicked out of the house by her parents at the age of 12 for “violating house rules.” Soon thereafter, Allen found herself living on the streets in New Haven, where eventually even the shelters would not have her. Then a friend recommended a place. It turned out to be the house of three grown men who raped and abused her for weeks until she escaped.

“I was broken. I was hurting. I was confused, and I was angry,” she said.But she also felt ashamed and harbored guilt because she thought all of it was her own fault.

At 13, she was taken in by a gay male best friend and his family. He was one of the few people who believed her, she said. On New Year’s Eve, home alone, they got into the liquor cabinet. He drank quite a bit, she said. He was sad.

“He blew his head off in front of me that night,” Allen told the silent audience. “I sat there crying as they took his body out in a body bag. What do you do from there?”

Aside from alcohol, she still hadn’t used a drug up to that point, she said.

At 17, she was married and soon had a child. Her husband was abusive. She was “lost in the world with nowhere to go,” Allen said. That led her to rebuild a relationship with her mother, who “was always there for my children,” said Allen. Some years later, Allen would voluntarily relinquish custody of her children to her mother to prevent the state from taking them.

Substance abuse did not become the nightmare of her life until a household accident burned her badly in 2001. Allen never shed a tear, until her mother and father came to her hospital room. “I was dead inside,” she said. She cried then for the first time since the suicide she had witnessed.

After months in the hospital and many skin grafts, she was discharged with a prescription for the opioid painkiller OxyContin, a prescription she refilled for seven years. According to Allen, the Sackler family, the owners of Purdue Pharma and makers of OxyContin, asked her to be in a documentary about the drug. She agreed and was filmed.

“I don’t know where that documentary is today, but I would definitely say something different today.”

Purdue Pharma and Richard Sackler’s efforts to boost sales of OxyContin became the subjects of a 2018 book by Beth Macy and later a Hulu television series, Dopesick.

Allen did not want to admit it, but she was addicted to the opioid painkiller. She needed it after the prescription ran out. “I needed more. Lots more,” she said.

She started snorting the ground up pills. But she needed more. On the street, OxyContin is very expensive, but withdrawal is brutal, she said.

“Then I was introduced to the needle; I fell in love that day. I swore I was going to marry that drug. And I pretty much did for years,” she said of her first experiences with heroin.

The addicted brain doesn’t work like a normal brain, Allen says. It lies. It makes excuses. It doesn’t think of consequences. To support her habit and the three children she had by then, Allen started selling drugs, too.

“By this time, I was selling massive amounts of drugs and doing even more,” she said. The nightmare of death by overdose had taken hold.

Allen described being revived five times in an eight-hour period by friends using NARCAN, or naloxone, the drug that can reverse opioid overdoses. Allen said, “I wanted them to just let me die.”

She went to prison for 18 months as a result of her habit and dealing. When she got out, she was high within minutes, she said. “People use drugs because they want to numb out something. Some people don’t even know what that something is.”

She said flatly that her mission was to die from an overdose.

During one stint in jail, Allen was diagnosed with cancer, a rare form that came in the guise of a 4-inch tumor on her neck—a tumor she had ignored due to her fixation on her “next fix.”

Only a considerate corrections officer got her to the hospital for the tests necessary. Otherwise, she said, she could easily have died on the floor in the jail.

Her addicted mind led her to manipulate the system, she says. No one wants someone who needs cancer treatment in their jail, so she could get out and get high. But by this time, she had lost the support of her family completely, though her mother still cared for the children. She said only a few friends truly cared about her. One of those would turn out to be her future wife, Rachel.

In 2017, after cancer surgery and with stitches in her neck, Allen overdosed again. She said she was “hoping that I wouldn’t wake up, but I was NARCANNED.”

This time was different because it was the day she swore off using heroin or anything else. The epiphany led her to believe that “something was keeping me here.”

She didn’t swear off selling drugs though, and she ended up in jail yet again. She was facing an 11-year sentence, which got pleaded down to six.

Her brain was not in recovery yet. It was still addicted, she said. “I thought my destiny was to die of an overdose.” But during that stay in prison, she asked herself, “What if I dared to dream?” What if she could have more in her life than drugs and an early death?

“That’s something I never thought of before, not since I was a little girl,” she said. From there, everything changed.

She took college courses and made the dean’s list. She represented other prisoners to protect their rights. “Turns out, I was good at it,” she said.

She took recovery coach training. Eventually, she was chosen as one of six individuals, out of more than a hundred, to join a program of the Maine Humanities Council to be a facilitator. She later became a public speaker for the group.

Allen helped write a bill to help people get early release, something she eventually benefited from. Rep. Rachel Talbot Ross of Portland drafted Allen to be part of her legislative staff , where she is paid by a grant to help write and pass legislation related to her areas of expertise: drugs, addiction, recovery and prison.

In addition to Rep. Ross, Allen works with the Restorative Justice Institute of Maine, the Maine Prisoner Advocacy Coalition and the Maine Recovery Advocacy Project.

In an interview, Allen described that she has spoken many times but has never written out a script.” I don’t write it out. It’s just the story of my life. I know it. I lived it.”

Because the story is so intense, she tries to add some humor, especially for older crowds, she said. “I just want to educate people that this is a disease, not a choice,” she emphasized.

For the future, Allen sees herself continuing the advocacy work and helping to save lives. “I’m just going to live happily with my wife and children and remain clean and sober.”