Stonington
Originally published in Island Ad-Vantages, May 12, 2022 and The Weekly Packet, May 12, 2022
A $73.3 million harvest makes Stonington the top port again
Lobster value rose in 2021 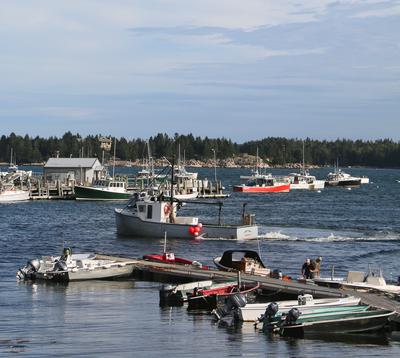 Stonington’s working waterfront landed the most valuable seafood catch in the state in 2021—again.

A jump in the price of lobster helped make Stonington the most lucrative fishing port in Maine again in 2021, according to statistics released by the Maine Department of Marine Resources earlier this month.

Vinalhaven came in a distant second, with a harvest worth $55.65 million, and Friendship third, at $40.3 million. Those top-three rankings have stayed consistent since 2019.

“The consistent increase in per pound value is a reflection of strong demand for the products harvested here in Maine’s coastal waters,” said DMR Commissioner Patrick Keliher in a statement. “This industry has once again proven that dedication to quality pays off, and that the best seafood in the world comes from Maine,” he said.

The next most lucrative seafood product was soft-shelled clams, which brought in $25.2 million, or 3 percent of the total harvest.