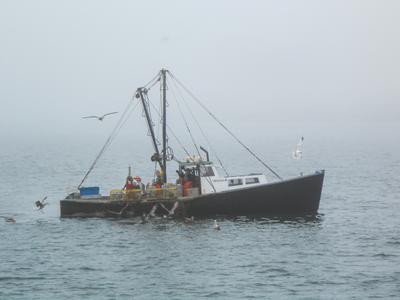 Lobstering in the fog off Stonington.

“The lobster fishery here in Maine is one of the most extensively monitored in the world,” according to Theresa Burnham, a postdoctoral research associate with the University of Maine. One of the few aspects of the catch that isn’t constantly surveyed is the community of people that brings them to market. Historically, no one has tracked the social and economic aspects of the fishery like housing availability, physical and mental health, and whether young people are joining the fleet. Burnham is working with a team of researchers to change that.

“Developing Social Indicators of Resilience in Maine’s Lobster Fishery” was the subject of a February 25 Lunch and Learn online event hosted by the Maine Center for Coastal Fisheries.

“Our project has the goal of allowing for monitoring of the human side of the fishery in an equally extensive way,” said Burnham, “because those socioeconomic indicators are also critical, but for the resilience of lobstermen, and coastal communities in Maine.”

The goal of the project is to understand how lobster haul translates to the well-being of the fishing communities on the ground.

“We kind of blew the top off of any knowledgeable person’s expectations of what the lobster population could do,” said Guenther, referencing the jump in the fishery’s productivity over the years. Maine’s lobster landing chart shows a steep rise in catches starting around 1990, with especially large gains in the early 2010s. “We’ve kind of come to a point where we are becoming socioeconomically dependent on lobster being at this at the top of its bubble,” said Guenther.

Last year the fishery broke records again, earning nearly $725 million. “This remarkably high value positions lobster to be the most valuable fishery in the country,” said Burnham. “The price that lobstermen are able to get for their catch was at an all time high. But operational expenses were also up, including prices for things like traps, supplies, fuels, and especially bait, which has been increasingly difficult to source in recent years.”

According to Burnham, lobster captains have also complained of challenges hiring and keeping sternmen to help bait, drop, haul, and empty their traps. She also notes that they are dealing with increasingly busy coastal waters and the regulations that may come with it.

“The catch in the value data may not fully capture the serious challenges that the fishery is facing,” said Burnham. “And that fact sort of highlights the need for additional socio-economic metrics that we can use to measure the status of the industry as a whole.”

To start, the team is searching for key indicators that could signal a shift in the fishing fleet, like a dashboard light in your car. The team starts by interviewing people working in lobstering, asking them what it means for the fishing fleet to thrive. So far, they’ve interviewed 30 members of the industry in coastal Maine and sorted responses into eight categories:
coastal accessibility
physical and mental health
profitability, financial health
business investments
personal spending
risk-taking
community composition.

Burnham said this is just a starting point and these indicators are likely to change as the process continues.

Burnman used the first indicator, coastal accessibility, during the presentation as an example of the next step in the process, data collection. They looked at realtor.com to find out how many homes are for sale in coastal Maine and how expensive those homes are. They looked at property tax transfer information to see where people buying property in coastal towns are coming from. And they are looking at state fishing licensing data to understand where license holders live.

The findings are not surprising. In the last five years, fewer houses are for sale and prices keep going up. The numbers are more dramatic on the coast and in fishing villages. They are incredibly dramatic in Stonington itself. And fishing license holders are migrating inland, away from traditional fishing towns.

The data said that it’s harder than ever for fishing captains and their crews to live near the coast and access their fishing grounds. It gives the research team an idea about how long this has been happening. Over time, it will help them see if it’s getting better or worse. These numbers tell a story about rising prices that may be eating into those record profits.

Similar methods will help them tackle the other seven indicators, or more, during the process. After they collect all the data they can, they’ll bring the results back to the fishing industry for feedback.

The process was previewed during the presentation, with responses from Kathleen Reardon, senior lobster biologist at the Maine Department of Marine Resources, and Kathleen Billings, Stonington town manager since 2007.

“You can make some serious money on the rental market now,” said Billings. “And that’s displacing not only fishermen being at the coast but everybody else. And it’s pushing us further towards that gentrification faster than I’ve ever seen.”

The team plans to keep asking for more feedback. “In fact, our entire process has been designed to garner regular input to improve our methods and source new data,” said Burnham. If you have thoughts or suggestions, email her at theresa.burnham@maine.edu.

An unspoken assumption underlying this work is that bubbles burst. The lobster population and industry are likely to drop, at some point, perhaps precipitously. According to the Maine Climate Council’s report, the “Scientific Assessment of Climate Change and Its Effects in Maine,” climate change and ocean acidification are likely culprits.

Billings said she has “spent some significant time” trying to figure out how to help Stonington rely less on the lobster fishery. She finds the lack of resources dedicated to foresight frustrating. “It’s almost like you have to be a mill town that crashes and burns before you can get any EDA money or anything,” she said, referencing the U.S. Economic Development Administration. “It’s a strange thing,” said Billings, “not to be able to be proactive, you know, in facing that.”