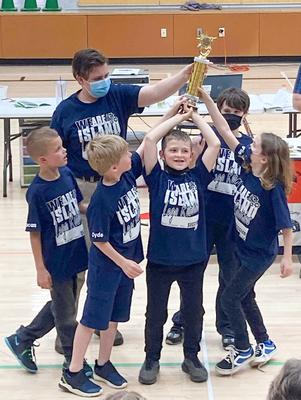 On May 21, Island Lego Robotics, a local team of eight youth robot programmers, took the first place team prize at the the Maine Robotic Track Meet at the Brewer Community School, with 64 out of a possible 70 points. They competed against eight other teams, with second place going to R2Bee2 from Hancock with 44 points, and third going to Digital Claw from Ellsworth with 39 points. Other competitors included Lincoln, Bangor and other groups from Downeast.

The Island Lego Robotics team has seven roboteers, ranging from third to eighth grade, from Deer Isle, Stonington and LaGrange. The team is coached by Torri and Jason Robbins, assisted by their son Sam, who was also a competitor. This was the group’s third time competing in the Maine Robotic Track Meet.

Coach Torri Robbins was delighted but surprised their team took first, since they only had three returning competitors. “I knew our robots were pretty solid,” she said. “But we really didn’t have any expectations because we had such a young team.”

The Maine Robotic Track Meet is held once a year. There are 10 events, with varying objectives in speed, strength, accuracy and programming. Each team can have up to seven entries; each robot gets three tries in its event. The judges award robots on “Gold Standards,” which are measurable benchmarks for each event. For instance, the Gold Standard in the Fastest Robot is 3.5 seconds. Five out of six of Island Lego Robotics entries earned Gold Standards.

The judges also award first through sixth place in each event. Island Lego Robotics took first in five events: Shay Billings and Clyde Haskell in The Delivery Mission; Quincy Lincoln and Charlie Lincoln in The Steeplechase; Sam Robbins in both The Ping Pong Shot Put and The Fastest Robot; and Lucas Jones in The Strongest Robot. Additionally, Charlie and Quincy Lincoln took second prize in The Walking Robot Race and Marcus Legere took fourth in The Table Clearer.

“Oh man, I loved Lego club,” Lucas Jones said. “And winning first place in my race and getting a trophy was pretty epic.”

Robbins runs Lego robotics classes through her enrichment school called the Explorations Learning Center in Deer Isle. Though the students compete individually or in pairs, Robbins said teamwork throughout the entire program is very important. The roboteers bounce ideas off of each other when they get stuck.

“Not everyone is an athlete, an actor or an artist. Lego robotic build sessions help develop friendships,” she said. “Students need experiences that build confidence and perseverance so they can tackle tough situations. The team spirit and collaboration that was exhibited between teammates and competitors at local build sessions and the regional track meet amazed me.”

Starting in February, the team practiced once a week. The roboteers started by designing their robots for a specific track meet event, whether that’s carrying a box through a maze, pulling 60 pounds or traveling as fast as possible.

“They have to figure out: How was my robot going to turn left when I want it to? How’s it going to turn right? What am I going to do to make my robot be the fastest robot?” These are just a few of the questions the students have to answer before building, Robbins said.

Once the design is complete, students actually build the robot with the Lego gears, wheels, beams and “brain.” Next, they program and code the “brain.” Finally, they test everything, and then make adjustments and tweaks to get their robot just right.

“I learned a lot about coding,” said Shay Billings, who competed in The Delivery Mission. “My favorite part was programming the Lego robot to do something and then seeing him actually do it!”

Going through all these processes takes persistence, problem solving, teamwork and determination. For instance, according to Coach Robbins, Sam Robbins had to adjust the hopper to his ping pong shot put robot multiple times, changing the height and angle to make the ping pong balls bounce into a box more consistently.

“Lego Robotics team is a good pastime,” Sam Robbins said. “All of the skills that you learn by building and programming are helpful things to know.”

According to Coach Robbins, working through these challenges in robotics is an excellent way to teach students how to set and achieve goals, using perseverance and teamwork. “It can be applied to the classroom or on the job,” she said. “Thinking outside the box, solving a problem that seems to have no solution. How can we do that? So just those little life hacks of how to work out a problem.”

Coach Robbins also offers robotics classes all year through the Explorations Learning Center. This summer, she is also offering a robotics camp starting on June 27, where students can learn all about building and programming Lego robots, as well as how to problem solve as a team and accomplish a goal. To sign up for the camp, email explorationslearningcenter@gmail.com. 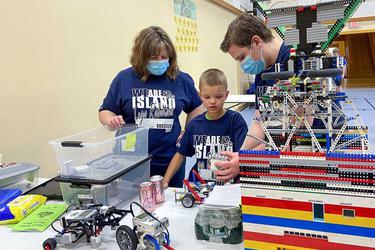 From left, Coach Torri Robbins, Lucas Jones and Sam Robbins run a last minute check on the axles in their robot for The Strongest Robot event. 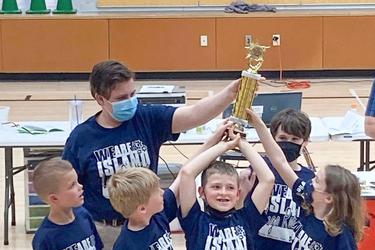 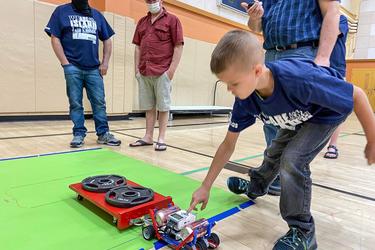 Lucas Jones gets ready for his robot to pull 60 pounds in the Strongest Robot category. His robot won first place in this event. 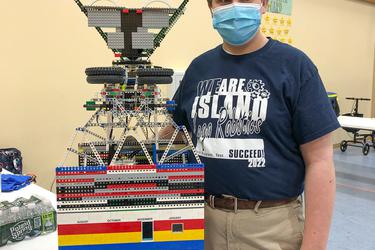