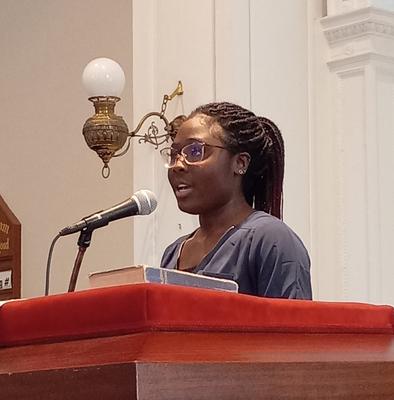 Jaso Lombeh, who was a refugee from Liberia, speaks to the World Refugee Day meeting at the First Congregational Church in Blue Hill.

At a meeting on World Refugee Day, June 20, representatives of local churches launched a plan to sponsor refugee students at George Stevens Academy this fall.

“We feel for all those suffering as war forces families to flee for their lives, but here in Blue Hill we have the chance to help at least one young Afghan and one Ukrainian now,” said Diana Page, moderator of the First Congregational Church of Blue Hill, which hosted the gathering.

A press release reports that one person who knew what education can mean for refugee children told those present that until she was 9 years old there was never a safe place, nor any classroom, for her. Ellsworth resident Jaso Lombeh said her family escaped from warring armies in Liberia, thanks to the United Nations program that sent her family to Canada to settle in Moncton.

“Without the support of the community there, especially the Baptist Church that sponsored us, we wouldn’t have been able to survive,” Lombeh said. “Once we got there, I learned English, finished high school and graduated from the University of New Brunswick.”

Last fall St. Francis by the Sea Episcopal Church contacted George Stevens Academy about the possibility of sponsoring an Afghan refugee student, soon learning about a refugee family with a teenager caught in Kabul when the Taliban took over. A joint effort with the Congregational Church, appealing to Maine’s congressional delegation, led to this young man receiving his travel documents from the U.S. Consulate in Islamabad last week.

After the invasion of Ukraine, a former GSA teacher working in Poland with refugees sent applications from students there as well.

The Blue Hill churches have set up a “Committee to Support Refugee Education” to work with George Stevens Academy to cover the costs of sponsoring at least two students.