Castine
Originally published in Castine Patriot, June 9, 2022
The word is out on Scrabble in Castine 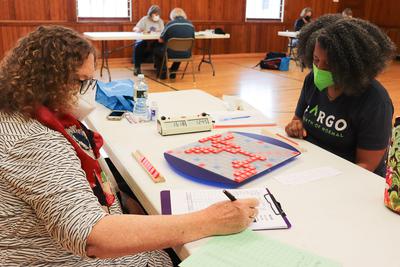 Melissa Brown, left, of Massachusetts squares off against Lisa Odom of Minnesota, who was undefeated in the weekend tournaments.

by David Avery and Rosemary Wyman

At Emerson Hall last weekend, June 3-5, 15 competitors tiled away in a three-day Scrabble tournament sponsored by the Camden National Bank. The tournament was sanctioned by the Word Game Players’ Organization, a North American-based Scrabble organization.

Players from as far away as California and Oregon, including nationally top-ranked competitors in this game of strategy and word knowledge, plumbed their lexicons and matched wits for fun and prizes, according to Keith Hagel of Castine, vice president of the organization’s board of directors and Scrabble enthusiast for 68 years.

The tournament began on June 3, with an early bird round of five games, followed by a 14-game tournament that took place on June 4 and 5.

Some of the players had competed in two previous pre-COVID Castine-based tournaments and returned, in part, because of the beauty of the area and the small-town welcome they received in the past and enjoyed once again.

“For those from ‘away,’ the chance to enjoy Castine and Maine also was a draw, with some bringing their non-playing spouses,” Hagel said.

Event organizer Sweet echoed these sentiments. “So why would people travel across the country and from other distant states to play in a competition in this coastal village?” she asked. “It is an amazing game that has thrived and grown for nearly 100 years and continues to attract players from around the world to its challenge. A lot has to do with a competitive drive, a passion for the game, and the camaraderie that develops among players as they play against one another in various tournaments over the years,” she said.

“For new players, the attraction is having the chance to play in a national tournament where they can test their wings after having loved playing Scrabble recreationally. Where else would a nationally top-ranked player be paired with an individual embarking on first ever tournament game? All are welcome to compete.”

Beginners are welcome, Hagel said, but they will face some stiff competition when they square off with tournament players.

No one got the word on how to beat Lisa Odum of Minnesota, however, as she double-doubled and “bingoed” her way to victory. She went undefeated in 19 rounds of play over three days.

Castine will host a mini five-game tournament on Friday, June 24. There is a fee to play, all of which will be given out in prizes. Feel like testing your wings? Contact Andrea Hatch for additional information at ahatch@mit.edu or 719-238-0983. New players are also invited to join the weekly Wednesday afternoon Scrabble club games. 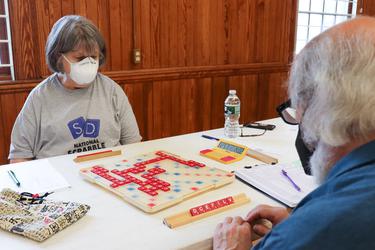 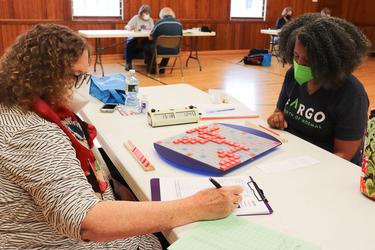 Melissa Brown, left, of Massachusetts squares off against Lisa Odom of Minnesota, who was undefeated in the weekend tournaments. 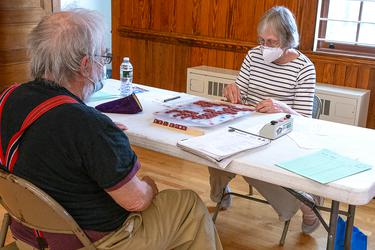 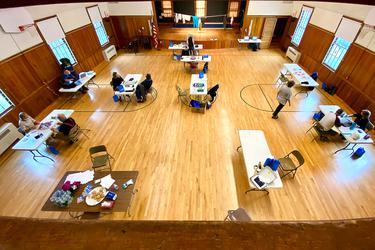 Bird’s-eye view of the tournament setup in Emerson Hall.