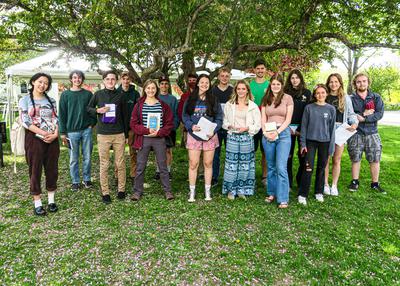 Eighteen juniors were honored on May 23 at George Stevens Academy’s book awards ceremony, attended by the junior class, family of the recipients, and faculty and staff presenters, according to a press release.

After welcoming everyone to the gym, Head of School Tim Seeley remarked that receiving a book award is the result of a lot of hard work and dedication on the part of the students, with the support of family, teachers and friends. He also said that attendees should be proud of every student who does their best, even if they don’t receive a book award.

The Phi Beta Kappa Prize, awarded to Danielle Callaghan by Director of College and Career Counseling Peter Goss, honors a junior who demonstrates a strong sense of intellectual curiosity both in and out of the classroom and a desire to connect education with issues in the wider world.

The Bowdoin College Book Award, awarded to Nora Spratt by Peter Goss, recognizes a student in the junior class who has demonstrated extraordinary service to the common good and an unusual passion for inquiry, discovery and innovative thinking.

The Rensselaer Medal, given to Azaiah Nanson by Math Department Chair Jaime Torre, is awarded by the Rensselaer Polytechnic Institute to a junior who has demonstrated high academic achievement, excelled in advanced math and science courses and exhibited significant involvement in extracurricular activities.

The College of the Atlantic Book Award, given to Lily Jaffray by Science Department Chair Megan Flenniken, is presented to an adventurous junior who is invested in creating positive change in the world and is engaged in their learning and their community.

The Independent Study and Internship Program Award, given to Sol Lorio by Megan Flenniken, recognizes a student in the junior class who demonstrates innovative thinking, creativity and determination while conducting their project work, while also creating an engaging exhibition presentation that is well regarded by, and inspiring to, the GSA community.

The Brandeis Book Award, given to Dell Davis-Batt by social studies teacher Kate Kennedy, is presented to an outstanding high school junior with a superb academic record who demonstrates a commitment to civic engagement, community service, political activism, social justice or volunteer work.

The Frederick Douglass & Susan B. Anthony Award, given to Hannah Webb by social studies teacher Morgan Lowe, is presented by the University of Rochester to a junior with a demonstrated commitment to understanding and addressing difficult social issues, who provides leadership and dedication to community action and who has earned strong marks in rigorous humanities and social science courses.

The St. Michael’s College Book Award, presented to Robert Bennett by Morgan Lowe, is given to a junior on two criteria. First, academic achievement (As and Bs in challenging coursework), and second, social conscience as demonstrated through sustained and sincere commitment to service, issues of peace and justice and concern for others.

The Bausch & Lomb Honorary Science Award, given to Thea Crowley by science teacher Steve Adam, is presented by the University of Rochester to a junior who demonstrates exceptional promise in science based on achievement in a rigorous science curriculum and in science-related activities.

The George Eastman Young Leaders Award, presented to Anthony Esposito by English teacher Martin Conte, is offered by the University of Rochester to a junior who has demonstrated strong leadership experience at school and in the community, who has earned high grades in challenging courses and who demonstrates extensive involvement in extracurricular activities.

The Williams College Book Award, presented to Sebastian Petrak by Martin Conte, recognizes a junior who has demonstrated intellectual leadership and has made a significant contribution to the extracurricular life of the school.

The Visual Arts Award, presented to Alexon Astbury by Visual and Performing Arts Department Chair Melissa Rioux, recognizes a promising artist in their junior year who demonstrates both ability and dedication to their study in the arts. This student makes original pieces and is brave in their investigation of mediums.

The Industrial Arts Award, given to Emery Leach by industrial tech and engineering teacher Corey Esposito, recognizes a junior who has excelled in industrial arts and shown exemplary attitude, collaboration and achievement.

The Smith College Book Award, given to Jillian Eldridge by Social Studies Department Chair Caroline Richards, recognizes a young woman who exemplifies academic achievement, leadership qualities and concern for others.

The Ramassoc Chapter of Maine DAR American History Award, presented to Phillip Ciampa by Dean of Curriculum and Instruction David Stearns, honors a junior for outstanding work in the study of American history.

The WPI STEM Leadership Book Award, presented to Layla Pickering by English Department Chair Erin McCormick on behalf of Worcester Polytechnic Institute, recognizes a high achieving junior who identifies as a member of one or more of the following communities: women, BIPOC and LGBTQIAPP+. Recipients also demonstrate academic achievement in a rigorous college prep program; commitment to leadership in, and engagement with, their school and community; a strong ability to collaborate, innovate and problem solve; and success in hands-on, project-based learning.

The Bagaduce Music Book Award, presented to Austin Chandler by music teacher Phelan Gallagher, recognizes a junior who has excelled in band, jazz band and combo and who has shown exemplary attitude, collaboration and musical achievement.

The Dartmouth College Book Award, given to Noël Da by Tim Seeley, recognizes a junior who is one of the top students in the class, is of strong character, has made a positive impact on the school community and has excelled in at least one non-academic area.