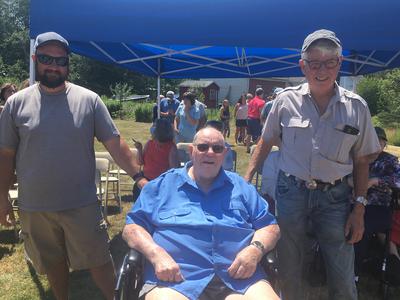 The Island Fishermen’s Wives Association held the 2022 Fishermen’s Hall of Fame induction at the Deer Isle-Stonington Historical Society on July 17. The three men who were honored on this warm July afternoon were David Heanssler, Ronnie Wheaton Sr. and Merton Eaton. A tribute was read about each fisherman and a plaque commemorating the occasion was presented to David, Merton and the family of Ronnie Wheaton Sr., who is deceased.

The Island Fishermen’s Wives were established in 1989 after the loss of two fishermen within weeks of one another. The ladies wanted to be able to help any way that they could and so the IFW’s was established.

One of the big projects that they accomplished was to establish Fishermen’s Day on the Stonington Fishermen’s Pier and pay tribute to the newly established Hall of Fame, which honors three fishermen who are nominated each year for this special honor, according to information provided by IFWA.

Following is the information provided by IFWA for each honored fisherman.

David Heanssler was born October 8, 1945, to Basil and Harriet Heanssler. At the age f 9, David started working with his grandfather, Augustus, on Saturdays. He went lobstering, shrimping, scalloping, gillnetting, fish dragging and fishing for sea cucumbers. His favorite was scalloping.

After David graduated high school in 1963, he went on to college for one year in Illinois. While there he joined the Air National Guard. He served for six years. David married his wife Betty in 1967. They have three children, Julie, Lisa and Jason, and two grandchildren, Kristen and Collin.

David actively worked with Greg Griffin at the high school with fisheries projects. He would take students out on Saturday and train them how to become a sternman. Most would grow to captain their own boat.

He had four boats during his lifetime. The first boat he bought from his father; the second boat was a Jarvis Newman; the third boat was a Young Brothers; and the fourth boat is a 40-foot Wayne Beal. With the exception of the first boat, all of the boats were named Jubeli, after Julie, Betty and Lisa. To this day, David is actively fishing from the Jubeli and loves being on the water.

David has been featured in the National Fisheries paper on several occasions with his inventions and his approach to the fishing industry. He was on the board of Penobscot East Resource Center (currently Maine Center for Coastal Fisheries) for several years, serving as president for two of those years. He has held various positions in two different churches.

David is a well-known and well-liked fisherman. He is known for passing on his experiences and knowledge as a fisherman to others. David, Ronald Shepard, Leroy Bridges, Cal Lawson and Brent Oliver have shared many stories together. He is always happy to help.

When he isn’t out on the water, David and Betty love to dance. He also loves camping, golfing and sport fishing. One of their greatest achievements was working in Biloxi, Miss., after Hurricane Katrina, which they did for six years.

Merton was born and raised in Little Deer Isle. He started digging clams at a young age with his father, Ralph Eaton. He loved the ocean, so it was natural for him to become a fisherman.

Mert worked as a sternman for Eddie Blackmore and later obtained his first boat from his wife’s grandfather, Calvin Stinson. The boat was a peapod with canvas sprayhood and only a compass to navigate by. His next boat was the very first vessel build by Richard Duffy of Duffy & Duffy Boats. Mert christened her Kathy Ann after the love of his life, Kathleen Ann, and his daughter Kathy. He fished that boat until he retired in 2021.

Over his career in fishing, Mert was always ready to lend a helping hand to a fellow fisherman or to anyone in need. Mert’s mission each day was to make someone laugh, even if that was broadcasted on the VHF radio, often regarding the contents of his dinner pail. Some spring days the catch was so bleak he had to eat the roast beef off his sandwich and save the cheese for tomorrow!

Mert made his living hauling traps in “the kelps” of the eastern shore of Isle au Haut. The tops of many ledges in the area are painted Newport Green, a mark left by Mert when he got a little close for comfort.

One important lesson he left the industry he loved so much was to never take anything too seriously, even in peril high and dry on a ledge in the middle of a howling winter storm. “Don’t worry,” he’d say to his crew. “Tide’ll wash us off eventually.”

Mert lives in Belfast with his wife of 65 years. The F/V Kathy Ann remains one of the most seasoned boats in Stonington Harbor.

Ronnie got involved in the fishing industry when he was a young kid. He used to bait bags in the bait shed for 2 cents a bag. He learned fishing at just 10 years old from his father, Joe Dodge, and his older brother, Bobby Wheaton.

Ronnie started out hand hauling in an outboard with wooden buoys, glass toggles and wooden boat. While working with his family fiberglassing flag poles, Ronnie would go clamming while still trying to start his own lobster business.

Ronnie worked in many types of fisheries, like lobstering, scalloping, crabbing, clamming and musseling. Lobstering was his true passion. He passed on his knowledge and love for fishing to many younger fishermen. He would give traps to help other fishermen just starting out. He would lend a helping hand or even money too. He would help haul boats or traps for fishermen that passed away.

When he wasn’t on the boat, you could find Ronnie in his ship building traps, knitting heads or even making his own bait bags. He was often seen with Roger Haskell. Ronnie owned many boats since his outboard. His final boat was a 32-foot H&H named F/V Donna Lee. He had the Donna Lee for 17 years before retiring. He used to fish year-round until his older days. He took all of his kids and grandkids out lobstering with him. His grandson, Shawn Haskell Jr., has taken over his boat along with all of his fishing secrets.

Ronnie was part of the Odd Fellows and also plowed for the Town of Stonington.

After the presentation, Suzy Shepard gave an update on the Fishermen’s Wives Youth Safety Survival Program, which was established in May of this year. They have joined with the Blue Hill YMCA, Maine Center for Coastal Fisheries and the Eastern Maine Skippers Program. At this point in time, they have put 75 Island students through the swimming classes. There are more classes to come in the near future.

Suzy also announced that the IFWA will no longer be hosting Fishermen’s Family Fun Day. It was a lot of work and it takes a lot of help and participation, she said. 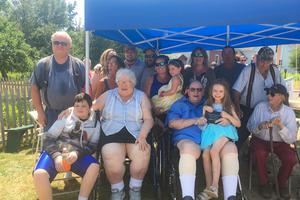 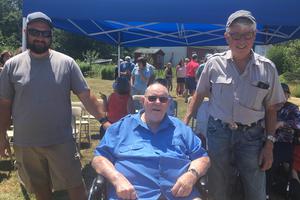 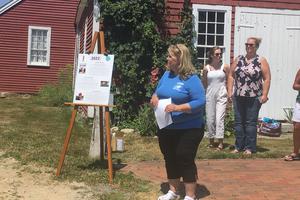 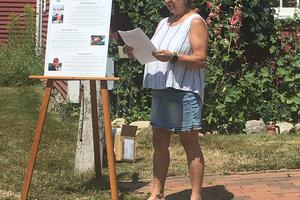 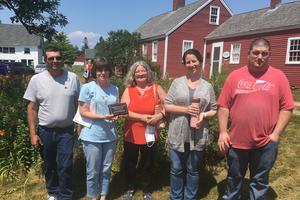