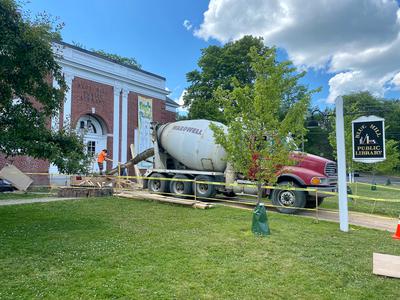 The final stages of the Blue Hill Public Library renovations include the redoing of the main entrance on Parker Point Road.

“They say you can have two of the three—on time, on budget and beautiful. And we got two of those. We’re on budget and so far it’s beautiful,” says library director Rich Boulet of the ongoing renovations at the Blue Hill Public Library.

Though the construction, which began in early 2022, has exceeded the original Memorial Day completion date, Boulet said that they are in the final stages and are “within days of having the big room functionally done.” Still being worked on (as is evidenced by the caution tape and wooden planks), is the Parker Point Road main entrance. An iron railing and granite steps are being installed—the former locally made and the latter locally sourced.

Boulet, who has been with the library for 20 years, reported that they raised just shy of $600,000 for the work, the impetus of which was to “future proof” the library. “The library of the future is a versatile space that can respond to community needs,” said Boulet.

Renovations include the revamping of the basement level. The Elvira Bass Room is now equipped with up-to-date technology for meetings, and there is a new bathroom and secure archive space. The main room on the ground floor now has mobile shelving that can be reconfigured for larger gatherings such as the annual holiday party and other events, including Paint the Peninsula and an upcoming puppet show. A retractible screen has been installed above one mantel for audio/video usage.

Boulet stated that Blue Hill-based Hewes & Company has been wonderful to work with. “It was very generous of them to fit us in,” he said of the construction outfit. “It was community minded of them.” He also praised Brooksville-based architect Bruce Stahnke as being “extremely collaborative” and “very generous with his time.”