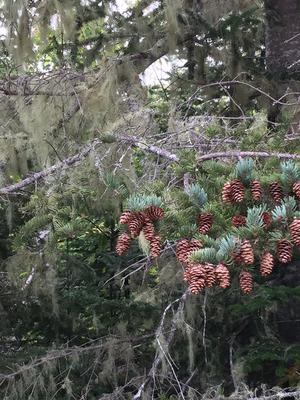 A mature spruce laden with cones.

“This is a unique forest we live within.”

“The Spruce-Fir Forest? Doesn’t that pretty much cover the whole state?”

“In the big picture, between the Hardwood Forests south and the Boreal Forest to the north, that’s true. But the influence of the sea adds more Cedars and Tamaracks.”

The Maritime Spruce-Fir Forests, dominating the coast of Maine from mid-coast to Downeast, occupy shallow and poorly drained soils with the associated cool climates. The plant composition changes to a Hardwood mix away from the coast before transitioning again to a different mix of Spruce-Fir Forest in the central and northern parts of the state. As climate change impacts this region with increased temperatures and warmer seas, the species compositions of Maine forest will be on the move.

Plant migration has been an ongoing process within the variations of climatic conditions over many eons, although the phrase “shifts in range” is the more common terminology. During the height of the last period of glaciation, Spruce-Fir Forests dominated the southeastern coastal plains while this region was covered with ice. These forests extended to the edge of the continental shelf, far off the current coastline due to the lower sea levels. So much moisture was trapped in the glaciers, the sea level was at least 300 feet lower.

“What will happen to our coastal forests with warmer temperatures?”

“That, of course, is unknown.”

“The rapidity of the increase in global temperatures has never been experienced before.”

Geologic records analyzed in sedimentary and fossil deposits over the past 65 million years have found similar temperature spikes as may occur in our near future. None happened at the speed of the current temperature increases. As temperatures warm or cool globally, animals move in response, adapt, or die off. Plants send seeds to new suitable habitat through wind-born deposition or by animal ingestion and excretion. Can these time-honored methods keep up with the temperature change predictions?

Acadia National Park is currently studying the options. With expected forest composition transitioning northward about 100 miles over the next 60 years, can the coast of Maine receive the seeds for the new species required to match the new climate? What are the responsibilities of humans to assist plants in adapting to a future of our own creation? Without a dominant acceptance of humans’ role in the cause, charting a path forward is fraught with complexity.

“We certainly have given ourselves extra challenges.”

“Are they more than we are up to?”

“It certainly makes this an interesting time to be alive.”