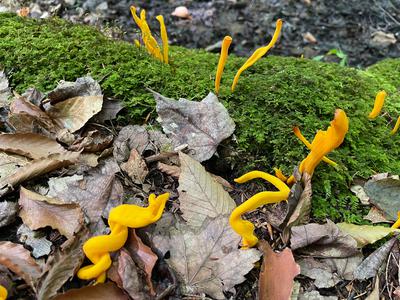 “To some, the gloomiest month of the year. Leaves all gone and no snow to brighten things up.”

“Let’s look back at some of our cheerful discoveries, like this bizarre fungus.”

Looking like a fever dream from H.P. Lovecraft, golden fingers arise from the mossy riverbank. Common with mushrooms worldwide, these extrusions are the fruiting structures of a complex underground network of mycelium. To corporeal creatures such as humans, the integration of understanding a life form such as fungi can be challenging. Simply identifying with the solid expression of the organism in their fruiting body, such as mushrooms, is more comprehensible than grasping the substance of the tiny threads of the below-the-surface fungal body.

The brightly colored extrusions of the Golden Spindles have a rubbery texture, becoming more brittle with age. Rising up to six inches above the ground, their thin and contorted structures give rise to their name. Also known as Fairy Fingers, their visage suggests an attachment to a larger organism beneath the soil surface. As fruiting bodies, their spores drift gently from the hollowed-out structure as they mature.

“While being a bit spooky looking, they have an odd attractiveness.”

“Another case of a short-lived appearance that sheds a light on what’s goes on unseen.”

“So much more is being discovered about what’s underground.”

Common throughout the Northern Hemisphere, these fungi are generally found in grasslands, lawns, and pastures in Europe. In North America, the woodlands and forests are their more common location. Obtaining their energy from decaying organic matter, these creatures have an important role in the degradation of plant material, no matter where they are found. They pose no threat to native or manufactured landscapes; indeed, they play a significant part in the cycle of life.

With their importance undisputed, the lack of detailed understanding of the Golden Spindles, along with their relatives, is surprising. The emphasis of human comprehension of our world is erratic and skewed. So much fascinating information remains unexplored, often important facts related to challenges which we face. How these fungi, and so many others, impact the carbon cycle and sequestration of carbon dioxide may be a required element in producing a solution.

“It was a surprise coming across these lifeforms that day.”

“From a distance, they looked like fingers coming out of the ground.”

“They are a nice addition to our knowledge.”