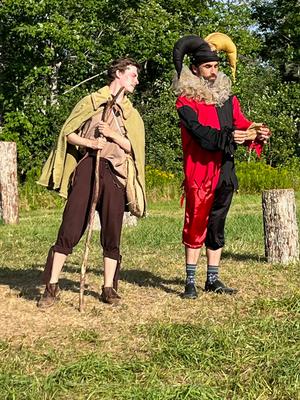 With a visible abundance of energy, creativity and talent, the Isle Theater Company will stage a new play at Horsepower Farm in Penobscot for eight performances between August 4 and 14. Playing Mercury, written by 25-year-old Anna Fitzgerald, is a medieval-period comedy inspired by Shakespeare.

The play is a romp in the countryside directed by 23-year-old Marvin Merritt IV. There is a small and observably passionate crew of actors, selected from across the country, and the company’s unusual choice of a working farm as their stage can keep the audience engaged as the play is performed in the dwindling light of a summer dusk.

Merritt and Fitzgerald met on their first day at Harvard, where they both received full scholarships to study within the Theater, Dance and Media program. They soon became fast friends, sharing an interest in modern drama, storytelling and community engagement.

Merritt grew up on Deer Isle and attended Deer Isle-Stonington High School, where he experienced the Reach Performing Arts program directed by John Lincoln. He graduated in 2016 and worked for two summers at the Stonington Opera House. Fitzgerald, after living in various parts of the U.S. and Canada, spent her high school years in Boston, after her father became pastor of the historic Park Street Church. She studied creative writing and English at Harvard.

On graduation in 2021, the two decided to form a theater company using only their meager resources and plentiful enthusiasm, according to the pair. Because Merritt’s intent was to engage diverse audiences to whom theater might not normally be accessible, they decided to work from Deer Isle. In the summer of 2021, they staged their first production, Do Not Move Stones, in collaboration with the Reach Performing Arts Center and Island Heritage Trust, using the dramatic setting of an abandoned granite quarry (Settlement Quarry). The play received eight BroadwayWorld Maine awards, including Best Production of the Year and Best Play. Their success has led to generous grants from the Maine Community Foundation and the Onion Foundation.

Merritt said he chose Horsepower Farm as the “stage” for this summer’s play because he was familiar with its exceptional beauty. His aunt and uncle, Donna and Andy Birdsall, own the 400-acre organic farm, and he has enjoyed many family gatherings there. His young cousin, Henry, will have a role. According to Merritt, the rustic buildings and green fields backed by woodland will allow the audience to escape to rural England in the Middle Ages.

Playing Mercury will be performed August 4-7 and 11-14, with all shows starting at 5:30 p.m. A digital on-demand version will be released in mid-September. Tickets may be purchased at isletheater.org.