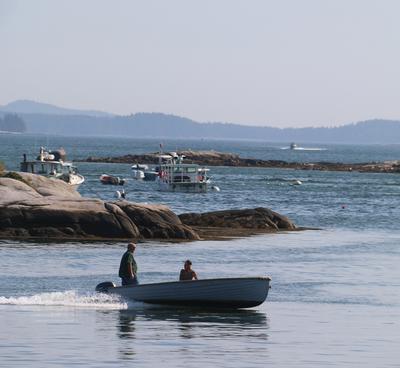 Coming home to bad news. NOAA on August 31 announced its long-awaited whale rule, which bans lobster fishing in 967 square miles of the Gulf of Maine from October to January.

The federal government will close 967 square miles of the Gulf of Maine to lobster fishing from October to January every year in order to protect the endangered right whale, the National Oceanic and Atmospheric Administration (NOAA) announced on August 31.

“This will sink a lot of people,” said Dana Billings, Stonington’s assistant harbormaster.

NOAA will also close two other large swaths of ocean to lobster fishing: one, south of Cape Cod, and another, along the northern coast of Massachusetts.

Inshore lobstermen will have until May to reconfigure their gear to meet the new requirements. They’ll have to put weak points in their rope and put more traps on one line. That, say fishermen, will create a safety hazard.

“More traps on a trawl will make an already dangerous job even more so,” said Crystal Canney, executive director of the Protect Maine’s Fishing Heritage Foundation in a statement. “Why would you penalize an iconic Maine industry for the sake of being able to say you are saving right whales?”

Local fishermen say they have never seen a whale and new rules targeting lobster fishery will do nothing to save them. It’s been two decades since a right whale was found entangled in gear attributed to Maine fishermen, according to a statement from Maine’s congressional delegation and Gov. Janet Mills. The new rule is neither fair, safe nor reflective of reality, they said.

Since 2017, 34 right whales have died and 16 were seriously injured due to entanglements and ship strikes, according to Michael Pentony, NOAA regional administrator, during a virtual news conference. He acknowledged that some of those whales were entangled in Canadian gear. He also said the U.S. government is working with Canada to help save the whale and expects to draft a regulation to prevent ship strikes by next spring.

NOAA’s Marisa Trego, Take Reduction Team coordinator, explained how her team discovered right whales in LMA 1. She said they used survey data on “predictive density” and information from buoys that show detections of right whales over the past few years.

NOAA expects to have a “ropeless fishing guide” by May 2022, Pentony said.

Overall, Trego said the new rules will cost fishermen between $9.8 million and $20 million in the first year. She said no federal money is available to help them.

Paul Anderson, executive director of the Maine Center for Coastal Fisheries (MCCF), said the regulations were expected. “We at MCCF are standing by the fishermen to help them figure out how to continue fishing within these rules,” he said.