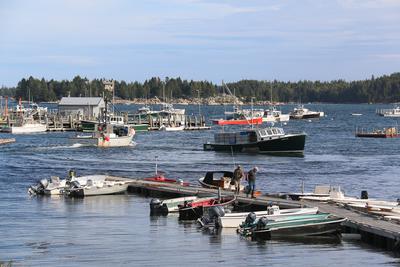 Fishermen wonder what will be left of Stonington’s working waterfront in 10 years if NOAA doesn’t fix its whale rule.

The Maine Lobstermen’s Association and the Maine Lobstering Union each went to court on Monday, September 27, to try to halt the damage to Maine’s lobster fishery caused by a new federal rule to protect the endangered right whale.

One seeks a short-term solution, the other long-term. Both say they want a rule that actually protects the right whale, and both say the rule will ultimately eliminate the lobster fishery.

On the same day the two groups filed, Gov. Janet Mills announced she hired a law firm to intervene in yet another lawsuit brought by environmentalists to restrict lobster fishing.

The rule, announced by the National Oceanic and Atmospheric Administration (NOAA) on August 31, starts to take effect on October 18. On that day, 967 square miles of the Gulf of Maine will be closed to rope fishing until January. The Maine Lobster Union sued in U.S. District Court in Bangor to stop the closure.

Another part of the rule takes effect in May. It requires upgrades to fishing gear that fishermen say will be costly. The rule itself is based on a document called a biological opinion, or BiOp. The Maine Lobstermen’s Association, in filing its lawsuit, is taking the long view by challenging the BiOp in an effort to undermine the scientific argument for the rule—and thus quash the rule itself.

As lobstermen’s groups fight to weaken or kill the whale rule, environmental groups seek to strengthen it.

On September 9, the Center for Biological Diversity (CBD) and other groups went to court claiming the federal government didn’t do enough to reduce the right whale’s risk of getting entangled in fishing gear. The case is known as CBD v. Ross.

The 967 square miles scheduled to be closed on October 18 is “one of the most productive and important lobster grounds utilized by Maine’s lobster fishermen and women,” according to the lobster union. Stonington-based Damon Family Lobster Company, owned by Bill and Amelia Damon, joins the suit as a plaintiff, along with the Fox Island Lobster Company of Vinalhaven.

The lawsuit claims the whale rule violates the Administrative Procedures Act (APA), a 75-year-old law that governs how federal agencies create rules. It has been called “a bill of rights” for Americans whose affairs are regulated by the federal government.

According to a statement by the lobster union’s lawyer, Thimi Mina, “the impact of such a hastily configured closure, virtually without evidence of any biological benefit to the North Atlantic Right Whale and its survival, is precisely the sort of arbitrary and capricious agency action that the Administrative Procedures Act prohibits.”

Mina added, “the economic injuries that would result from this closure to the Maine lobster industry, and the safety risks resulting from crowding 200 fishermen into other waters already occupied by fishermen, is needless and without scientific or statistical support.”

Ginny Olsen, spokesperson for the lobster union, said in an email that the union felt the best path forward was to stop the closure now through the APA.

The Maine Lobstermen’s Association (MLA) is taking a different tack. It wants to overturn the BiOp and thus strike down the whale rule altogether, according to Patrice McCarron, MLA’s executive director.

“The science that drives both of them is bad and we want them sent back to the agency,” McCarron said in a phone interview. “We’re trying to undo these precedents so they don’t snowball.”

Otherwise, she said, the rule will wipe Maine’s lobster fishery off the map.

McCarron pointed out that the BiOp directs NOAA to take even more draconian steps than required by the rule announced in August. That rule is intended to reduce the risk to right whales by 60 percent. By 2025, the government will order more steps to reduce risk by another 65 percent and then, finally, by 87 percent in 2030, she said. In total, the BiOp calls for a 98 percent reduction of risk to right whales.

“This 10-year ticking clock to erase us, we have to address that,” McCarron said.

According to the complaint, reducing risk by 98 percent isn’t possible without driving most of Maine’s lobster fishermen out of business permanently. It also argues the agency disregards scientific information about right whale migration that shows the Maine lobster fishery poses very little risk to right whales.

The case was filed in U.S. District Court in Washington, D.C. Lawyers for the MLA include Lewis Brisbois Bisgaard & Smith and Stoel Rives.

The Maine Lobsetermen’s Association is an intervenor in CBD v. Ross.

On September 27, a federal judge granted the State of Maine intervenor status in CBD v. Ross, as well. The state is challenging both the rule and the BiOp, according to a press release from the governor’s office.

“A court decision in the plaintiff’s favor could close Maine’s lobster fishery altogether—a completely unacceptable outcome that would be devastating to our lobstermen and their families and devastating to our coastal communities and our economy,” Mills said in a statement.