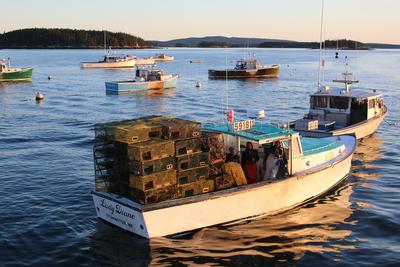 With scallop season set to begin, inshore lobster boats are hauling their traps. The Lady Diane brought in a few to the Stonington Lobster Co-op.

The Maine Department of Marine Resources on November 18 said it could take two weeks for lobster fishermen to remove their gear from roughly 967 square miles of the Gulf of Maine.

The National Oceanic and Atmospheric Administration declared the offshore zone closed to rope fishing until January 31 under a new rule aimed at protecting the endangered right whale. After a month-long court battle, an appeals court upheld the closure on November 16.

Local fishermen say the closure will simply force more fishermen into the rest of the fishing grounds and create denser curtains of rope.

U.S. Rep. Jared Golden, a Maine Democrat, said that the annual closure from October 1 to January 31 sets a dangerous precedent. It “will give federal agencies a green light to pursue regulatory actions that could devastate communities without any regard for whether or not those efforts are grounded in facts and data,” he said in a statement.

Town Manager Kathleen Billings said that the closure makes it more complicated to make a living fishing. “The supporting shoreside infrastructure and jobs are affected as well,” she said in an email.

With no hard data to back up the timing of the closure, she said, “it is hard to have any confidence in the dates being thrown out by NOAA.”

However, the federal government and conservation groups did persuade the U.S. Circuit Court of Appeals for the First Circuit that data showed rope fishing endangers whales in the Gulf of Maine.

“Reducing entanglements by prohibiting fishing in this area is critical to ensuring the survival of right whales,” said Erica Fuller, a senior attorney at the Conservation Law Foundation, in a statement. “This decision affirms that science matters. The First Circuit got it right: entanglements often can’t be traced, so where whales, lots of lines, and heavy fishing lines coincide, we need fishing restrictions now.”

DMR in a statement said fishermen must remove all gear from the area and may not set new gear in it.

“It’s regulations like this one that make people distrust government. Instead of looking out for hardworking people, our government cares more about appeasing deep-pocketed environmental groups that can litigate our lobster fishery out of existence,” Golden said.