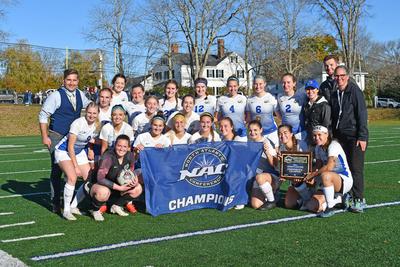 The women’s soccer team shut out Cazenovia College 2-0 on Saturday afternoon, November 6, at Ritchie Field at MMA, to win the 2021 North Atlantic Conference Championship. This is the second-consecutive championship win for the Mariners, according to a press release from the NAC.

Suzanne Wooldridge snuck a ball from teammate MacKenzie Carter into the bottom of the goal, beating Cazenovia’s goalie Meghan McCarthy, to put the Mariners ahead 1-0 in the 17th minute. Carter added an insurance goal in the 38th minute to make it 2-0, when she beat a number of defenders and a charging McCarthy. The Mariners cruised to the shutout victory, their sixth of the season.

The Mariners held a 12-3 advantage in shots and a 6-1 edge in corner kicks. Bess MacArthur made two saves in net for the Mariners to earn the victory, while McCarthy ended the afternoon with five saves in the loss for Cazenovia.

With the win the Mariners improve to 11-6 overall and capture their second conference championship in program history. As the NAC Champion, MMA receives an automatic bid to the NCAA Women’s Soccer Tournament. They will face regional host Massachusetts Institute of Technology this weekend, with the winner advancing to the second round November 20-21. Semifinals will be December 3-4 at UNCG in Greensboro, N.C., with the championship game December 4. Semifinal and championship games will be livestreamed at NCAA.org.

The women’s volleyball team defeated SUNY Cobleskill, 3-0 (25-12, 25-12, 25-15) on November 6 to claim their fifth-straight North Atlantic Conference championship, and ninth since first winning in 2007.

The Mariners dominated the Fighting Tigers with their quick offense and impressive hitting. In the first set, the Mariners totaled 13 kills, on .308 hitting, and scored four straight points to claim a 25-12 win. Maine Maritime jumped to a quick start in the second set, going on an eight-point run, and never looked back in the 25-12 win. Hunnie Zuber-Stephens ended a competitive third set with a kill to claim the NAC championship.

Rachel Melampy led the Mariners with a game-high 15 kills, seven digs, four assists, one ace and one block. Katie Albritton chipped in a game-high 27 assists, eight digs, three kills and half a block, while Sydney Rich recorded 10 digs, two assists and two aces. Zuber-Stephens tallied 11 kills, 10 digs, and one assist.

Alexis Miranda led the Fighting Tigers with five kills and half a block, while teammate Maleigha Ellithorpe recorded 15 assists, eight digs and one ace.

The Mariners advance in the 64-team national championship and face Susquehanna at regional host MIT November 12-14. The regional winner advances to an eight-team round in the finals November 18-20. The championship NCAA match is set for November 20 in St. Louis, Mo., and will be livestreamed at NCAA.org. 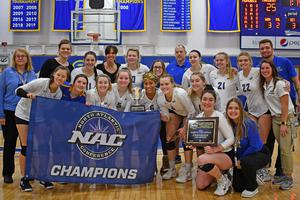 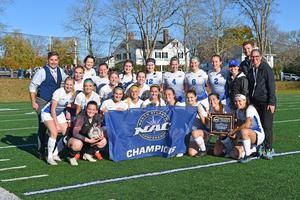