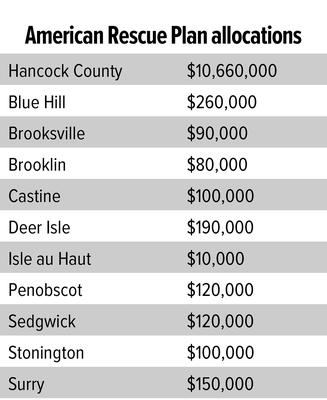 Towns on the Blue Hill peninsula and islands can now expect windfalls totaling more than $1 million from the federal American Rescue Plan, signed into law on March 11.

Towns on the Blue Hill peninsula and islands can now expect windfalls totaling more than $1 million from the federal American Rescue Plan, signed into law on March 11.

The economic rescue package distributes $1.9 trillion, including funds for municipalities as well as $1,400 checks to most Americans. Because of the economic stresses caused by the pandemic, local town and school officials have been saying they anticipate lean revenue years in the near future.

The money for local towns was allocated according to population, according to the Maine Municipal Association (MMA). Hence, the MMA estimates Blue Hill will receive $260,000 compared to tiny Isle au Haut’s expected $10,000.

The rules for exactly what municipalities can do with the money haven’t been published yet. Maine Gov. Janet Mills said in a statement she expects more guidance from the U.S. Treasury and other federal departments.

The law says towns can spend the money on helping households, small businesses and nonprofits hurt by the pandemic, according to the MMA. It can also be used to help industries like travel, tourism and hospitality. Or it can be used to replace lost revenue and on water, sewer and broadband infrastructure.

In addition to money for towns, the law offers help for child-care providers and health-care workers, the MMA said. It extends food-assistance programs and unemployment benefits, and it funds school reopenings and vaccinations, especially in hard-to-reach communities. It also helps small businesses and includes programs for restaurants and live venues.