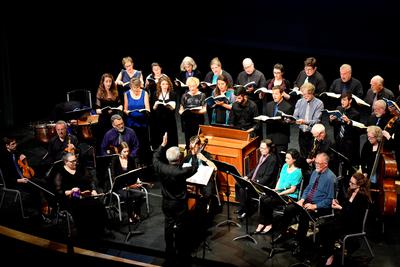 The Blue Hill Bach annual summer festival is back for its 11th season, live and in-person, beginning mid-August with a series of small-scale concerts. Pictured is the Blue Hill Bach full ensemble.

The Blue Hill Bach annual summer festival is back for its 11th season, live and in-person, beginning mid-August with a series of small-scale concerts.

On Wednesday, August 18, at 7:30 p.m., at St. Francis by the Sea Episcopal Church in Blue Hill, a program entitled “The Intimate Bach” will feature music for harpsichord, in the inaugural concert of an instrument recently donated to Blue Hill Bach. Festival Music Director John Finney will be the featured soloist in Bach’s Brandenburg Concerto No. 5. Other music on the program will include selections from the “Notebooks for Anna Magdalena Bach,” Bach’s violin sonata in E major, performed by Jude Ziliak, and an organ prelude specially composed for the occasion by this year’s Blue Hill Bach Young Artist Fellow, Julian Bennett-Holmes, who will perform on the church’s magnificent tracker organ.

Blue Hill Bach’s festival week offers free events for the public, including a master class in Baroque performance practice for string players on Tuesday, August 17, at 7 p.m. at the Blue Hill Congregational Church, and the popular “Bach’s Lunch,” a lecture-demonstration about the music in this year’s festival, presented by conductor John Finney and members of the ensemble, on Thursday, August 19, at 12 p.m., in collaboration with Blue Hill Co-op Café.

Blue Hill Bach will observe CDC guidelines and asks that only those who are fully vaccinated attend. All performers will be vaccinated and singers and wind players spaced at a safe distance. Programs will be recorded for release on Blue Hill Bach’s website and YouTube channel.

For more information and to purchase tickets in advance, visit bluehillbach.org or call 613-5454.