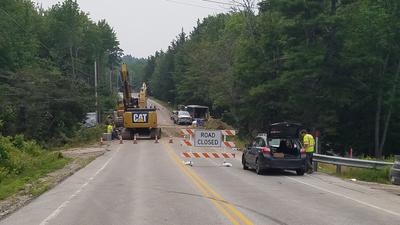 Motorists will have to take a detour around the Snow’s Cove Road culvert replacement in Sedgwick through mid-August.

As water was drained from a dammed area of Snow Brook, in preparation for the Snow’s Cove Road (Route 15) culvert replacement project in Sedgwick, workers recovered a variety of fish species from the stream that feeds Frost Pond.

At the July 15 Sedgwick select board meeting, chair Ben Astbury said that he had attended a meeting at the construction site on July 14 with members of project committee, who include representatives from Brooksville, Penobscot, the Maine Coast Heritage Trust (MCHT) and the project contractor, Maine Earth, located in Hampden. In addition to discussing various elements of the project, the group learned about some of the fish species that were recovered from the area around the culvert by Fish and Wildlife biologists.

“We did get to speak to several of the folks who are working on the project,” Astbury said. “They had started to shut down the stream and they recovered a bunch of fish—one being an alewife that was an inch long that had made its way down from where it had been stocked, an American eel, a sucker, a Brook trout, and I think there were some shiners there.”

The primary goal of the $1.1 million project is to restore passageways for alewives, said Ciona Ulbrich, MCHT senior project manager, in a previous interview. The project is completely funded by grants acquired by MCHT from the National Fish and Wildlife Foundation, the Nature Conservancy and the MDOT Municipal Partnership Initiative.

Ulbrich said the Snow’s Cove Road project is the final fishway restoration project being completed for the Bagaduce River Watershed. The existing round culvert is being replaced by a large concrete block culvert to allow passage to Snow’s Brook and Frost Pond, she said. Water from Snow Brook is being rerouted through use of six pumps and a series of large hoses. Workers also placed netting and sedimentation control measures around the work area.

On July 18, Snow’s Cove Road closed for construction, which is expected to be completed by August 17, contractors estimate. Traffic is being detoured along Route 176, ending at the intersection of Route 175 and Snow’s Cove Road. Local traffic will enter on either side of the road closure, according to the public notice posted on Sedgwick’s website.