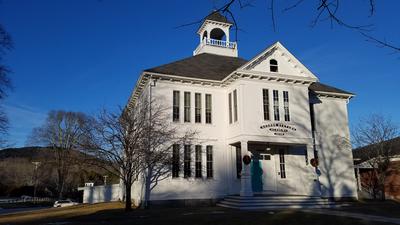 A Sedgwick couple have raised concerns about a hybrid instruction model in place at GSA.

A Sedgwick couple submitted separate letters to the “Another View” Forum section of The Weekly Packet to list their concerns about various decisions made by the administration of George Stevens Academy.

Day’s letter primarily advocates that GSA “return to in-person learning five days a week, just like every other school surrounding GSA. It is entirely possible for GSA students to return to full-time in-person learning with implemented safety measures (it is worth mentioning that Dr. Shah has stated schools, outside of not leaving your home, are safer because there is a minimal transmission due to safety procedures schools are required to follow.).”

Timothy Seeley, GSA’s head of school, in a Monday, January 18, telephone interview and in a letter to “Another View,” listed health concerns as the basis for the school’s decision to provide a hybrid instruction model during the pandemic. In addition, he said that the Czuj and Day letters contained “factually incorrect” information.

In her letter, Day said that the administration has told parents “that the results of a student survey revealed remote learning is going just fine.” In addition, Day claims in the letter: “The administration has a fast and [loose] relationship with the truth….If GSA isn’t asking for parent and caregiver input and feedback, GSA does not know how remote learning is going.”

In response to Day’s questions about the “student survey,” conducted in early November by the administration, Seeley noted that the informal survey, which included both qualitative and quantitative questions, was based on anecdotal evidence. In addition to students, faculty were also surveyed to determine which students are doing well and those who are not doing well as remote learners. He noted the survey was not designed for input by parents/caregivers.

Czuj said in his letter that GSA “is in trouble, though—on the brink financially, operationally and reputationally—and in desperate need for peninsula towns and taxpayers that fund it to rally around it, but with some tough love….Stevens’ board and leadership have painted the school into a corner. Its endowment gets increasingly tapped for mere survival.”

Seeley stated in a January 18 email, following the telephone interview, the reason GSA has requested increased funding from the participating towns. He said that the “state-set tuition is not enough to run a high school” and that the Department of Education tuition increases have not kept up with the cost of living.

“Our problem is not mismanagement, not that the Board has ‘painted us into a corner’—we have actually done an excellent job with shrinking resources, keeping GSA going as a full service high school with programs for all students on the peninsula with less funding than other high schools,” Seeley said. “The law allows a 7-percent [endowment] annual draw. We draw 5 percent. We did a one-time increase two years ago from 4.2 percent—a very conservative number….The endowment is growing, from $7,260,513, (Dec. 31, 2019); to $7,608,902, (Dec. 31, 2020).” He also disputed Czuj’s claim that GSA’s staffing costs were excessive, stating GSA’s “overall costs are right in line with other high schools like us in Maine, and local high schools….”

In addition, Seeley said local enrollment has not been more than 300 students since 2007. Since that time, it has grown by 35 students and is now more than 300.

Sally Mills, chair of the GSA Board of Trustees, stated in a letter: “Faced with a global pandemic, GSA’s faculty and administrative team have literally reconstructed their delivery of education to comply with CDC guidelines and keep everyone safe and healthy. Another challenge is GSA’s need to bridge the gap between what the State pays to educate students and the actual cost of educating students. To this end, GSA has requested from sending towns an increase in town tuition of $1,000 per student over the “maximum allowable tuition” (MAT) for fiscal year 2022.”

To learn more about GSA’s reasons for requesting a tuition increase, visit georgestevensacademy.org/towntuitioning.