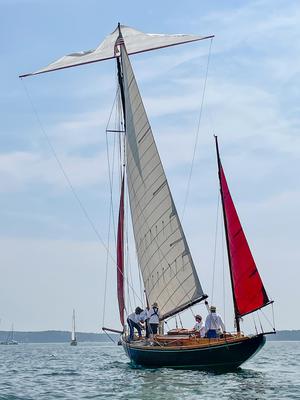 If it seemed there was an increase of wooden boat traffic on the east end of Eggemoggin Reach the past weekend, that would be a sound observation. The Eggemoggin Reach Regatta had its 36th year of racing Saturday, August 7. The tradition was started in 1995 by Steve White and Frank Hull of Brooklyn Boatyard and features wooden and classic boats. This year was hosted by Brooklin Boat Yard and Rockport Marine.

This year played out a little differently because of COVID-19. White said, “There has been pent-up demand to get out on the water. There are 111 boats this year, which is not a record but close. Sailors want to be out and about on their boats. Sailors have been disappointed by the delta variant [of COVID] but are doing a good job of distancing and wearing masks,” he said.

“It is no secret people wish to resume some normalcy opposite of the life they were used to under COVID,” White concluded.

The weather conditions at the start of the race around 11 a.m. were overcast with a south wind of 4 knots. The race was delayed for a half hour due to lack of wind, so the starting whistle blew at 11:30. At midday, the temperatures began to climb and conditions became hazy. However, the wind picked up to 11 knots. There have been few delays in the regatta’s history and one cancellation due to fog.

The course starts northwest of Torrey Castle and Torrey Ledge then goes down Eggemoggin Reach, then south with Egg Rock to starboard (right), rounding Halibut Rocks, then back up north with the finish line between Naskeag Point and Babson Island.

To understand how the race played out sailors were interviewed for comments. A crew member aboard Marilee, the winner of the Vintage B class said, “The geography of the course impacts the wind and therefore the course.” (Landforms, particularly islands, can impact wind flows and shifts.) Curtis Flood, a crewman on Desperate Lark, commented on course conditions: “It was a tough last leg of the course as the current nearly canceled out the weak wind, very challenging conditions. The breeze was up and down throughout the race, one of the slowest races in recent memory.”

People from all over the world bring their boats to race and watch. A small party at Wooden Boat Publications followed the race with music by Primo Cubano and food by Bianco Catering. 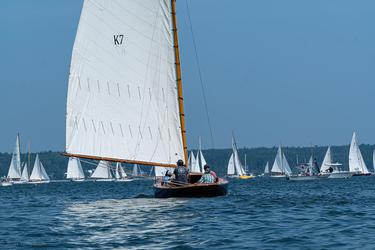 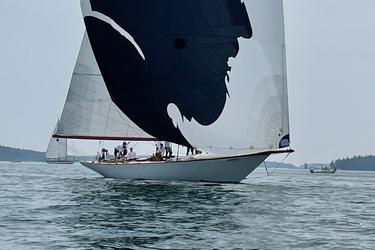 Marilee, a Herreshoff design and the winner in the Vintage B class, flies a spinnaker sporting Herreshoff’s image. 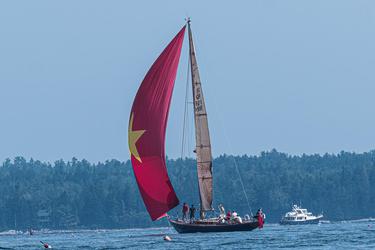 The Hoi An participates in the Eggemoggin Reach Regatta on Saturday, August 7.