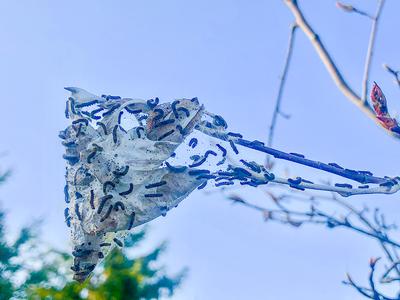 It’s a tale at least as old as continental drift—an organism from a distant habitat manages to catch a ride to an unfamiliar shore, benignly settling down to a new life or else inadvertently wreaking environmental havoc.

All the above are also present to some extent in Maine and have altered the native landscape to a greater or lesser degree, becoming endemic with the hopeful exception (so far) of the emerald ash borer.

But there’s another notable and infamous resident of Maine that has burgeoned lately, the browntail moth. The primary source of annoyance is the toxic hairs shed during the moth’s caterpillar stage, which produce an uncomfortable, itchy rash similar to poison ivy.

According to Maine Forest Service entomologist Tom Scheelk, since 2015 infestations have been slowly increasing in size and scope, spreading into western Maine and north along the coast. This year, annual surveys of known infested areas and their surroundings found two satellite populations in Aroostook County.

“It’s not a new problem by any means; we’re just in the midst of the latest outbreak,” Scheelk said.

According to the Maine Forest Service, browntail moths were accidentally introduced to Somerville, Mass., in 1897. With a native range encompassing Europe, western Asia, and the north coast of Africa, the insect quickly found a footing in its new home, and by 1913 was well established in all the New England states, New Brunswick and Nova Scotia.

After its peak in 1913, the population began to naturally decline until by the 1960s only a few small populations remained on Cape Cod and on several islands in Casco Bay.

In recent years though, that trend has markedly reversed, especially along the coast.

While it’s unclear exactly what causes these population fluctuations, several factors may contribute, said Scheelk. Firstly, warmer and drier spring weather prevents a native fungus from infecting the caterpillars as they emerge from their winter cocoons, allowing more of them to survive and reproduce. Additionally, the fact that much of Maine’s human population is focused on the coast inadvertently helps caterpillars to move around on vehicles and boats. The moth’s primary host, oak trees, also tend to predominate along the coast.

To help prevent the spread of the caterpillar to new areas, Scheelk suggests inspecting vehicles before traveling from a known infested area. The caterpillars tend to make use of “any sheltered area, a vehicle that has sat for a bit” and “tend to move around as they get bigger,” said Scheelk. There are several species of native caterpillars that also are active in the late spring and summer, but browntail moth caterpillars are easily identified by two distinctive orange dots on their back and long, woolly hairs.

In winter, it’s also important to inspect oak and fruit trees around the house for winter webs. Scheelk suggest looking up at the trees with the sun to one’s back for the telltale bright white silk usually formed cocoon-like around the terminal end of a branch. Webs can then be pruned and burned or soaked in soapy water. For major infestations, hiring a professional to spray targeted pesticides or inject certain trees is an option.

Since the species is well established in Maine, most of these efforts are designed to mitigate human contact with the caterpillar and therefore Scheelk recommends focusing on trees in high traffic areas and to “not worry about trees in the woods.”

For their part, the Maine Forest Service conducts annual winter web surveys in known infested areas and surrounding buffer zones to measure population expansion. Crews drive major roads, scanning for webs and setting data points estimating the number of webs per tree. The agency then publishes a map detailing their findings for the entire state.

On the Peninsula, winter web surveys this year suggest that browntail moths “are at elevated population levels still similar to past years,” said Scheelk. According to the survey map, population levels appear to be slightly higher on Deer Isle.

One local organization that is working to reduce the impact of the moths is Island Heritage Trust in Deer Isle.

Throughout the last few months, stewardship director Tenley Wurglitz has been leading volunteer efforts to clip and destroy winter webs on the trust’s various preserves. She has also managed a pole pruner lending program for people to access nests beyond their reach.

The early spring this year has made this effort more challenging.

“Because of this warm weather we’ve been having and the speed with which tree buds are emerging, we have noticed the beginning of caterpillar activity emerging from the nests much earlier than last year,” said IHT Executive Director Julia Zell. “People should begin to be very cautious of coming in contact with webs starting now.”

At the state level, the Maine Forest Service is currently supporting research at the University of Maine and conducts monitoring plots to study natural disturbances that can regulate the moth’s population.

Scheelk points to the native fungus that, accompanied by a cold, wet spring, can send browntail moth populations crashing as an encouraging natural control measure.

“I’m more of a fan of bio-controls than trying to spray your way out of a problem,” he said. 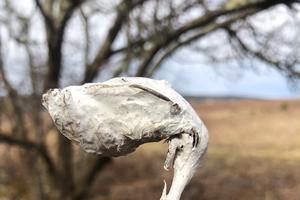 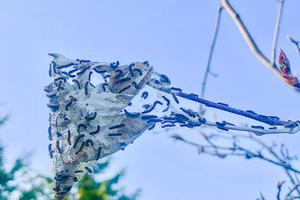 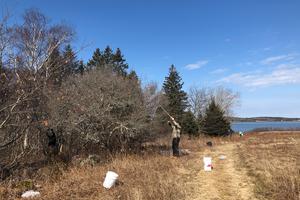