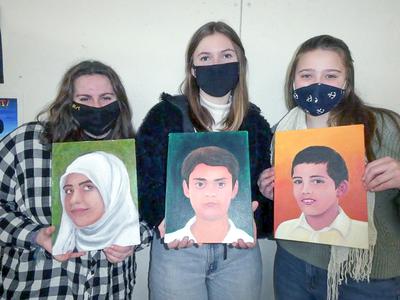 From left, Taylor Wiberg, Anwen Hudson and Leighia Gray with the portraits they painted for three Afghan children as part of the international Memory Project, which aims to make abused and poor children feel valued.

Three local high school art students painted portraits of Afghan children and then sent their work to them as part of the international Memory Project, which aims to make abused and poor children feel valued.

Deer Isle-Stonington High School teacher Cynthia Pease said she’d wanted to participate in the Memory Project since she learned about it in 2005.

“This year, despite the pandemic, the timing was right because I had a talented group of advanced artists with the skill and heart to create the likeness of three children from Afghanistan,” Pease said in a press release

The students—Taylor Wiberg, Anwen Hudson and Leighia Gray—gave up three of their five vacation days in February to work on the project, Pease said.

“It was a great experience to be a part of,” said Gray.

The Wisconsin-based Memory Project describes on its website its mission to create a kinder world through art. The nonprofit invites skilled art students to make portraits for children facing challenges such as poverty, abuse and war.

“The portraits help the children feel valued, show them that many people care about their wellbeing, and provide them with a special childhood memory for the future,” the website says. The Memory Project claims to have coordinated the delivery of 180,000 portraits to children in 55 countries since 2004.

Brooksville artist Robert Shetterly got involved with the DISHS students by bringing five portraits he’d painted to the art class and describing how he creates a likeness, according to the press release. Shetterly is known for creating a portrait series, “Americans Who Tell the Truth.” He returned for a final critique before the students mailed their portraits to the Memory Project.

“Having a renowned artist, such as Robert Shetterly, was a great boon for our students,” said Pease.

Wiberg said Shetterly provided a new way to look at portraiture. “It really helped us look at our paintings in a different way and improve our paintings,” she said.

Pease said the portraits are now on their way to Afghanistan, where they will be handed to their subjects.

Each DISHS students traced their hand, wrote their first name and taped a small photograph of themselves on the back of the portrait they painted.