Stonington
Originally published in Island Ad-Vantages, April 1, 2021
Stonington once again top port in Maine
But fishermen caught half as much as in 2016 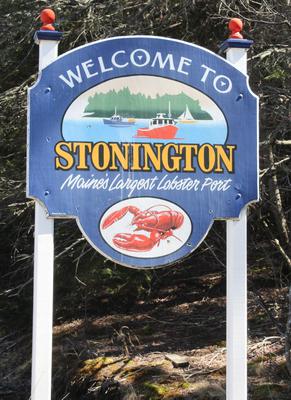 The “Welcome to Stonington” signs on Routes 15 and 15A can stand for another year. Maine’s Department of Marine Resources once again ranks Stonington as the top lobster port in the state.

Stonington remains the most lucrative fishing port in Maine, though the overall lobster harvest declined in 2020, according to preliminary statistics released by the Maine Department of Marine Resources on March 24.

Maine lobster landings have been falling, though not steadily, since the record set five years ago. In 2020, Maine fishermen harvested 96.6 million pounds of lobster; in 2016, they harvested 132.6 million pounds.

During that record year, fishermen landed 23.75 million pounds of seafood in Stonington, DMR said. In 2020, they landed about half that amount—11.9 million pounds.

The total Maine catch in 2020 was down about 5 percent from 2019, according to DMR’s preliminary numbers.

Gov. Janet Mills called it “one of the most difficult years in memory” in a statement, but credited fishermen and dealers with hard work and a dedication to quality.

Lobster made up 79 percent of all Maine seafood sales, bringing in $405,983,832. The second most lucrative species of seafood, the soft clam, totaled only 3 percent of all landings, bringing harvesters $15,671,473. A price increase of 6 cents per pound helped boost clammers’ take, according to DMR.

Scallop prices, on the other hand, fell by 19 cents per pound, which made the scallop fishery the third most lucrative behind clams and lobsters, the DMR said.

Maine’s lobster industry did remarkably well after the market’s near-collapse a year ago, DMR Commissioner Patrick Keliher said in a statement. Big lobster consumers—cruise lines, casinos and restaurants—shut down early in the pandemic, and some local lobstermen then reported prices as low as $1 a pound.

“Dealers developed new markets and harvesters adjusted effort based on market realities,” Keliher said. That resulted in a good boat price in a year with “seemingly insurmountable obstacles,” he said.

Additionally, the European Union’s lifting of tariffs and the reopening of Asian markets came at a fortunate time, according to Paul Anderson, executive director of the Maine Center for Coastal Fisheries, in an email.

In August, the Trump administration’s mini-trade deal with the EU ended tariffs on certain European products in exchange for an end to tariffs on lobster. Then U.S. lobster sales to China began to rebound, according to the U.S. Census Bureau. In December, the U.S. exported $31 million worth of lobster to China, up from $7.8 million in December 2019.

Anderson also said there is very little lobster in storage. “So the price has remained quite strong, which helps keep the value of the fishery up and helps fishermen’s bottom line, despite reduced landings,” he said.