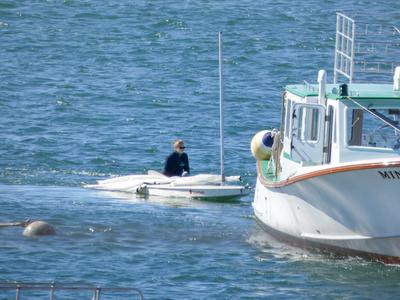 Quick thinking and quick action by mailboat captains Trent Quinby and Mike Moffett saved this Sunfish sailor and her companion from getting blown out to sea. Ellen Dinsmore just happened to see the rescue from her house and took photos.

Two Isle au Haut mailboat captains, Mike Moffett and Trent Quinby, acted quickly to save two people from being blown out to sea in a Sunfish with a broken rudder on the morning of August 30.

Moffett said he and Quinby were preparing the mailboat Otter for her run to Dark Harbor shortly after 9 a.m. when a passenger on the dock saw a commotion on the water.

“He said, ‘I don’t want to alarm anyone, but it appears this couple is in trouble,’” Moffett said in a phone interview.

The couple turned out to be two women who didn’t disclose their names.

“They were floundering around, the wind was taking them over the ledges,” Moffett said. “If they got any farther we couldn’t have gotten to them.”

Moffett and Quinby fired up the Mink, the smaller of the two mailboats, and went out to get the distressed sailors. The wind from the northwest was gusting up to 30 mph and whitecaps reached three and four feet, Moffett said.

“No way should they be out there,” Moffett said, adding the Sunfish belonged on a lake, not the ocean. “In the ocean, you slip off, you’re in the cold water.”

Quinby drove the Mink out and Moffett threw them a line. “Everything was good, then I don’t know what happened but one of them fell off the Sunfish,” he said. Quinby hoisted the woman overboard onto the Mink.

“Trent whipped her on the boat like she was a can of tuna fish,” Moffett said.

Then, said Moffett, Quinby read them the riot act. “It sank in,” he said. “He was pretty rough on them.” But when they were tied up on the Colwell Ramp, he went over and apologized, Moffett said.

However, he said, “you’ve got to teach these people the ocean is a serious business.”