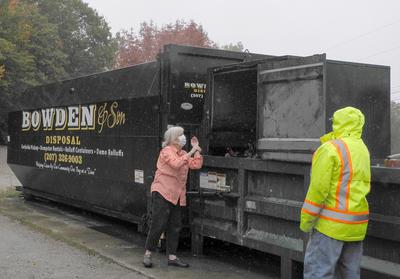 Penobscot resident heaves household trash into a container at the town’s transfer station, as the facility’s manager, Eric Dees, looks on. Penobscot sends household trash and most recyclable materials to Orrington for incineration.

Earlier this year, there was a wave of hope and enthusiasm for recycling in the area from Surry to Castine to Stonington. In February and March, students at George Stevens Academy and Deer Isle-Stonington High School won the hearts and minds of civic leaders by advocating vigorously for a Maine law to require manufacturers to bear the cost of disposing of commercial packaging, especially plastic.

Then this spring, the towns of Deer Isle and Castine instituted plans for a simplified form of recycling that would send various types of solid waste, including plastics, in a single stream to a brand-new waste processing facility in Hampden operated by a company known as Coastal Resources. The plant, using equipment touted as state of the art developed by Fiberight Technology, was set up to separate reusable materials—including plastic, cardboard, paper, metal and glass—from mixed household trash. The plant would then process the extracted recyclables into pulps that could be used for various products including construction materials, rugs and fuel briquettes.

Then a double whammy struck. First, the COVID-19 pandemic froze commerce, including the processing of certain waste streams at transfer stations. But more significantly, in late May, the Fiberight/Coastal Resources plant was forced to shut down within a week or so of its opening. Since then, the transfer stations serving Deer Isle and Castine have sent most of their recycling materials along with household trash to the Penobscot Energy Recover Company (PERC) in Orrington, where it is incinerated. The Blue Hill-Surry Transfer Station, which serves Blue Hill, Surry, Brooklin, Sedgwick, and Brooksville have been sending most of their recycling and trash to PERC for approximately three years.

Residents who bring waste to the Deer Isle, Blue Hill-Surry, and Castine transfer stations are still being told to separate recyclables from household trash, and put them into a separate “single source” recycling hopper. But both types of materials are burned at the PERC incinerator, where the generated heat is used to create electric power. Under an executive order which recognizes the financial hardships for Maine towns during the pandemic, this “waste-to-energy” burning of recyclables “constitutes recycling” according to Maine’s Department of Environmental Protection. Yet many understand recycling to mean converting used materials into something useful. Many others see the burning of such potentially reusable material to make electricity as adding to the problem of global warming.

Why do transfer stations bother having people use one hopper for household trash and another for household waste? “We want to keep people focused on the idea of recycling,” explains Jim Fisher, Deer Isle’s town manager. Jeff Jewett, who manages the Blue Hill-Surry Transfer Station, is thinking along the same lines. “We are using separate hoppers because the towns hope recycling will continue in the future,” he said. Both Fisher and Jewett envision a time when the Fiberight/Coastal Resources facility is up and running again and markets for recyclables return.

According to Jewett, the Blue Hill-Surry Transfer Station has been sending all household waste and most recycling material to PERC since 2018. “The cost of sending recycling to Ecomaine [a waste processing facility in Portland] went from $50 a ton to $150 a ton,” he said. Jewett believes his transfer station will reopen the windows for separate sorting of cardboard, metal cans and newspaper once the COVID-19 crisis abates sufficiently. However, he cautions that the public expense of processing recycling far exceeds the return to the towns when the items are sold to brokers. “We can spend approximately $240 in labor costs to create a half bale of cardboard that sells for $90,” he said.

Fisher puts the recycling rates for Deer Isle for items sent to vendors, such as scrap metal or cardboard, at $200 per ton. Recycling payments to the town is currently limited to scrap metal and electronics. At $252,024 in 2019, Deer Isle’s total costs related to its transfer station trailed only road expenditures as a town budget item.

Fisher says costs for this year are projected to be higher. Indeed, as of September 22, the Deer Isle Transfer Station costs were just under $210,000. According to Fisher, cost drivers include the clearing of “mountains of waste that had piled up” at the transfer station, as well as additional household waste related to the earlier arrival and later departure of seasonal residents due to the pandemic. The town spends approximately $5,000 per month on the hauling of 15 truckloads of household, demolition, and recycling waste.

Castine, which sends recyclables and household trash over to PERC, has yet to experience any significant increase in costs for its transfer station, according to Town Manager Shawn Blodgett. He says that Castine is “contractually obligated” to await a resolution of the Fiberight/Coastal Resources fiscal issues. Negotiations on that front are being handled by Maine’s Municipal Review Committee, the not-for-profit organization that represents the 115 Maine towns under contract with Fiberight/Coastal Resources.

Stonington, too, lists costs related to its transfer station as the second highest town budget item behind road expenditures. But Stonington never did business with the Fiberight/Coastal Resources facility. Town Manager Kathleen Billings said the selectmen were never convinced that the facility was economically viable. They proved to be prescient.

Stonington now continues a waste management program that differs just slightly from the period before the COVID-19 onslaught. Household waste, certain demolition debris and furniture are sent to PERC for incineration, with a per ton tipping fee of approximately $76, a slight increase from prior years. (Note: all the towns discussed in this article pay approximately the same tipping fee to PERC.) Due to the pandemic, Stonington has set up a series of labeled bins in a newly constructed shed outside the main recycling building. These bins accommodate social distancing as residents distribute various types of recyclables.

After a few days to allow any possible COVID-19 virus to disappear from the bin items, Transport Station Manager Tom Brophy, assisted by his brother David, sort and bale the materials in the recycling barn. Stonington has been selling salvaged cardboard, newspaper and #2 plastic to the Maine Resources Recovery Association for approximately 20 years.

Also, as recently reported, Stonington is working with Kate Tomkins, founder of the not-for-profit Chickadee Compost to set up a composting site for household waste at the transfer station. It is hoped that the composting site will significantly reduce the amount of household waste sent by the town to PERC and the attendant transport costs. Tomkins says up to 30 percent of the waste carried by residents to the transfer station could be composted.

Like Stonington, the town of Penobscot avoided entering into a contractual relationship with the Fiberight/Coastal Resources facility. According to Selectman Phillip Rapp, an ad hoc committee for the town carefully analyzed a presentation on behalf of the facility and was put off by a contractual provision that required Penobscot along with certain other towns to send its waste to a landfill in Norridgewock if the Fiberight/Coastal Resources plant wasn’t operational. “It was pretty clear to us that the smart money was to stay with PERC,” said Rapp, a civil engineer.

The Penobscot Transfer Station—open just two days a week—handles the least volume of any of the five stations in the area. All plastics, paper and cardboard dropped off by residents that once was sold to recycling firms now goes to PERC for incineration. The town only sells scrap metals to recyclers for repurposing. Eric Dees, who manages the site, said the town stopped recycling the other materials a couple of years ago. Why? “Not worth it: too expensive to haul it,” he said. Dees did note that glass waste is crushed by the town and essentially recycled as road-bed material.

Plastics are the problem, not China

Both town managers Jim Fisher and Kathleen Billings are concerned about the lack of market for plastics at this time. “We need to get serious about recycling plastics,” says Fisher. If Billings could have a recycling wish: “It would be less plastics. I wish we could have biodegradable material. Why can’t soap come in cardboard containers like it used to?” she said.

Although there is a general belief that the trade war with China ruined the market for plastic recycling, industry experts say the problem is much more complicated. “The death blow to recycling overseas was caused by unscrupulous operators sending unsorted, contaminated materials to China,” said Matthew Strong, who was the Asia and Latin American Sales and Operations Manager for Crow International, Inc., a firm that specialized in electronics recycling, a significant component of which involved repurposing of plastics. “By 2016, China had gotten tired of dealing with this corruption and started making stricter and stricter rules for the types of materials it would accept, until finally it just shut down the recycling industry for plastics, as well as cardboard and mixed waste paper,” he said.

The unfortunate fact, say those familiar with the industry, is that it is currently cheaper for manufacturers to make virgin plastic than to process recycled plastic into new products. Strong points out that for many years the low price of fracked gas controlled the price of plastic. The reason: Many plastics are made from ethylene, a compound which is derived from the ethane contained in natural gas. “So America’s drive for ‘energy independence’ helped fuel the downward spiral of plastic recycling,” says Strong.

More recently, according to Davis Taylor, Economic Professor at the College of the Atlantic, the fracking market has collapsed under the onslaught of cheap oil from Saudi Arabia. Yet he notes that the “rebound effect” of the lower oil prices still means “it’s cheaper to make new plastic out of new oil, than to reuse old plastic.”

Professor Davis does say that the technology could be there for biodegradable plastic, although a project at the College of the Atlantic to compost biodegradable plastic utensils met with mixed results. He encourages movements like the one voiced by our local high school students to have manufacturers assume the costs of their plastic packaging. “Vested interests will push back,” the professor warns, “But Germany has made manufacturers bear such costs with no discernible damage to their economy.”

The pervasiveness of plastics in our environment—micro-particles in the air, water and our bodies—is a critical environmental challenge of our time. “A political will needs to be generated to deal with this problem,” says Professor Davis.

Prognosis for the Coastal Resources/Fiberight Facility

In the meantime, the good faith effort by 115 Maine towns to recycle single-sort trash at the Coastal Resources/Fiberight facility is not dead in the water. Michael Carrol, Executive Director of Maine’s Municipal Review Committee (MRC) which represents these towns, reports that his not-for-profit organization is reviewing three viable offers from businesses to buy the plant. Carrol thinks the new owner could be prepared to take over the facility and resume its operation in or about early next year, after careful financial vetting and DEP review.

The successful and cost-effective resumption of operations at the Hampden recycling facility might cause towns to take another look at how solid waste and recycled materials are handled. “The technology works,” says Carroll, “and the process is much better than the current methods of disposal.”

“If the people decide they want us to do recycling, that’s what we’ll do,” says Penobscot Selectman Rapp. So those who may be disappointed that their communities have halted comprehensive recycling in favor of incineration—especially our young people—may have reason to hope that their towns may return to such programs in the not too distant future.