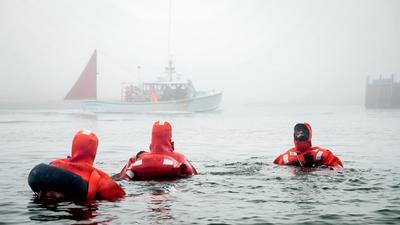 Part of the Skippers Program is learning how to survive in the water by conserving energy and keeping the crew together. Students practiced those skills in Stonington Harbor on November 9.

Igniting a safety flare without setting your boat or yourself on fire is something everyone who fishes ought to know. So is what to do when someone falls overboard. So on November 9, eight Deer Isle-Stonington High School students and recent graduates lit flares and put out fires in front of the Maine Center for Coastal Fisheries. Then they jumped into Stonington Harbor and practiced saving energy while in the water. They also learned how to keep their crew together and how to get into a survival raft after releasing it.

The students spent the day on safety training as part of the Eastern Maine Skippers Program (EMSP), made available through a grant to the Maine Center for Coastal Fisheries (MCCF). MCCF offers the seamanship and safety program to eight coastal high schools. At Deer Isle, students take two Skippers Program classes a week, taught by Kim and Matt Larson.

Commercial fishing is one of, if not the, most dangerous occupations in the United States, according to the National Institute for Occupational Health and Safety. Fishermen are 29 times more likely to die on the job than the average worker, NIOSH reported. A NIOSH study found the most common cause of death at sea was drowning after a fishing vessel sank, capsized or caught on fire. Its No. 1 recommendation is to take a safety course every five years.

John McMillan is the certified fishing vessel drill conductor who put the young skippers through their paces. “How to respond to an emergency aboard a fishing vessel,” is how he described the day-long safety training.

McMillan showed the students how to fight fires, abandon ship and rescue a man (or woman) overboard. They practiced those skills using life-saving equipment approved by the U.S. Coast Guard, McMillan said.

Though the one-day safety training is a course requirement for high school students, it can also lead to a captain’s license. Myra Hobbs, a recent DISHS graduate, said she’s taking the course because she may pursue fishing as a career. She’s working as a sternperson now.