Blue Hill
Originally published in The Weekly Packet, July 30, 2020
BHCS graduates 31 to honks of applause
Drive-in ceremony at the Fairgrounds 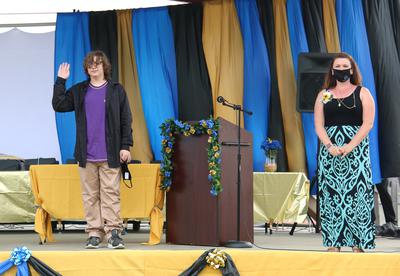 Eighth grade graduation or tailgate party? For Blue Hill Consolidated School, a drive-in ceremony at the Fairgrounds proved both, as graduates and family members parked, tuned their car radios to a live broadcast station, and honked loudly and often to show their appreciation for teachers, parents, students and Principal Shelly Schildroth.

“Is there a more iconic [place] than the Blue Hill Fairgrounds?” Schildroth asked at the ceremony’s start late afternoon July 22.

In a choreographed dance of sorts, rows of parked cars and trucks inched forward to the stage in small groups, students crossed the stage to receive diplomas, a BHCS Bobcats sweatshirt, and a sweatshirt from the high school they plan to attend, all in a safe, sanitized cardboard box.

As one row of vehicles exited, the next row pulled forward through enough rounds to officially graduate all 31 students.

“This definitely will be a graduation to remember,” Class President Camden Chung opened her speech.

While the traditional student performances were curtailed, and Chung spoke in place of all four class officers taking their turn at the mic, each student still received a personal, humorous goodbye from teachers and the ceremony ended with a video compilation of their school memories as in years past.

Eighth grade teacher Kat Hudson congratulated the graduates on their “extraordinary effort” during long months of remote learning: “Our BHCS students knocked it out of the park.”

Personalized messages from Hudson and teacher Vicki Davis drew a snapshot-in-miniature of each student, like Jack Guinness’s “international persona,” and thoughts for their future: “Believe in yourself because we believe in you.”

Schildroth characterized the Class of 2020 as “smart, funny, talented, passionate and kind,”and role models for the younger students. She also announced student awards for academic and civic achievements.

“Be safe, be strong and be kind to yourself and others,” Davis urged her now-former students. “Go forth in kindness.” 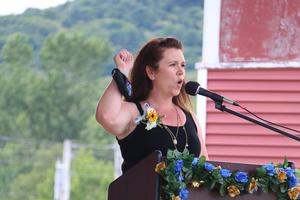 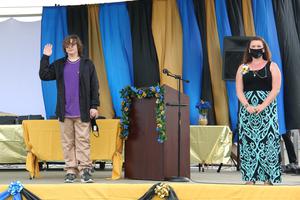