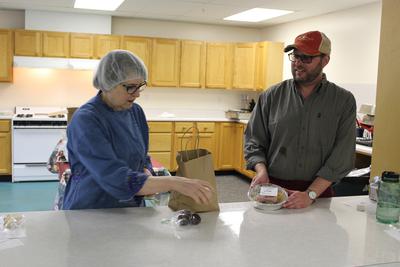 All 62 residents and 38 of the approximately 85 staff caught the virus, and 12 residents died.

“After that I‘ve been bawling like a baby,” said Davenport, who has worked at the nursing home for six months and came to love the residents. “It was rough.”

But the nurses got a lot of support from the community, she said. “Our meals that we get, the notes, the kids’ drawings, made it a little easier.”

For months before the nursing home outbreak, volunteers had been preparing meals and messages to feed the stomachs and spirits of the island’s seniors. It was only a short step to take care of people who needed it at the Island Nursing Home.

“The overwhelming support of the community has been amazing. Nothing goes without appreciation from the snacks, meals, postcards, notes, gifts and so much more!” Matthew Trombley, the nursing home’s executive director, said in an email.

The nursing home staff shortage was so severe that Andy Sankey, director of Maine’s Emergency Management Agency, got a phone call at 1 p.m. on Thanksgiving telling him there was a standing emergency, he said in a phone interview.

They worked long hours and stayed in temporary housing, unable to do much cooking or shopping for themselves. Some caught COVID-19 and had to isolate. So local volunteers began leaving meals, with notes and kids’ drawings, in coolers outside their doors.

“Someone has to take care of them,” said Barrett Gray, who owns Boyce’s Motel, where several nurses are staying. Gray for four years has also coordinated the volunteers who run the monthly Salt Air Seniors lunches. Those volunteers were ready to go into action when COVID-19 broke out in the nursing home.

The Salt Air Seniors lunch, sponsored by the Healthy Island Project, was a light-hearted social event for 50 or 60 seniors that once brought in an Elvis impersonator. It required volunteers to help cook, serve, clean up and entertain. In March, when Gov. Janet Mills ordered a ban on large gatherings, the volunteers quickly pivoted to delivering hot lunches to seniors, some housebound and alone.

The first traveling nurse came to stay at Boyce’s on the day after Thanksgiving and told him she’d be working extra shifts. She came to Maine from Florida, thinking it was safer here. Instead she caught COVID-19, Gray said.

Then Robin Davenport arrived at Boyce’s. She’d been renting a room from an elderly woman in Bar Harbor and couldn’t risk exposing her to the virus.

Gray realized how dire the nursing home situation was when Davenport checked in. “I’ll never forget the look in Robin’s eyes,” he said. “She was terrified.”

Just around then, his friend Pam Dewell texted him randomly to offer help, he said. Pam’s daughter, Oriana Wuerth, had used the mealtrain.com app to organize volunteer meals when a friend had a baby. So the three of them organized a meal train for the nursing home staff. “Dear Amazing Island Community,” it read.

“The staff was dropping like flies,” Gray said. “I saw the need with the traveling nurses. Pam said we have to offer [meals] to all.”

They also organized two snack trains—a daily one for people, a weekly one to provide seed for the birds that feed outside the nursing home residents’ windows.

Davenport said the snack train came at a perfect time—especially the ginger ale.

“We just needed more ginger ale,” she said. The soda helped the staff keep the sick residents hydrated when they couldn’t eat, she said.

The worst is over now, said Davenport in a phone interview on December 20. “Everyone is on the mend and getting their strength back,” she said.

Her home is in Butler, Ala., but she will be working on Christmas, away from her three grandchildren. Someone gave her a small ceramic Christmas tree for her room at Boyce’s, though, and Robin Alden will be bringing Christmas dinner.

At the nursing home there are many, many gifts waiting for the residents to open on Christmas, according to Rene Colson Hudson, HIP director. Hudson and Nancy Wynne solicited a long list of specific items—non-slip socks, sets of note cards, stamps.

A Christmas tree is being set up in the nursing home, Trombley said in a recent Island Health and Wellness podcast. They will hang 12 angels on the tree in memory of the residents lost to the coronavirus.