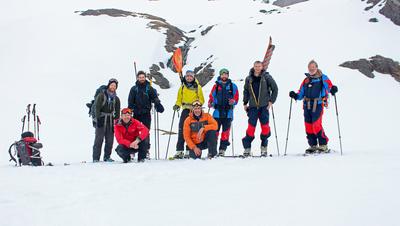 Paul Mayewski, at far right, stands with his 2015 research expedition crew in the remote regions of South Georgia Island.

Climate change has been at the center of environmental and political discourse for well over a decade but perhaps never so much as now. The United States recently pulled out of the Paris Agreement, a coalition of nations working to reach a consensus on ways to reduce the human factors contributing to climate change. Days later, a trillion-metric-ton ice chunk broke free from the Antarctic Peninsula, creating one of the largest icebergs known throughout human history.

“It’s really a harbinger of how coastal portions of Antarctica and Greenland will collapse in decades to come,” climate change scientist Paul Mayewski, a Brooklin resident and director of the University of Maine Climate Change Institute in Orono, recently said.

Mayewski discussed the effects of politics on U.S. climate change action with Penobscot Bay Press, and gave some insight into the complex science behind determining humans’ effect on the world’s warming oceans, the changing jet stream, and the barrier between the cold air in the north and warm air in the south.

Adventures in climate change
“Most people think of scientists [as working] in a lab,” Mayewski said.“I had a PhD for 10 years before I thought of myself as a scientist.” A research scientist enamored with “the thrill of going to unexplored regions, and the thrill that whatever you find is new,” Mayewski has headed research expeditions since 1972 into parts of Antarctica where no human had stepped before to drill for ice core samples that show hundreds of years of chemical levels. Since then, he has returned many times and broadened his field of research into Greenland, the Himalayas, the Tibetan Plateau, the Andes and, since 2012, South Georgia Island, by way of sailboat from the Falkland Islands.

Each year, Mayewski shares his research and adventures through talks all over the world aimed at the non-scientific public.

“The way people appreciate climate change is if you bring it to where they live,” he said.

As he brings his and his fellow Institute scientists’ work to the public, so, too, do people come to him: filmmakers and journalists drawn by Mayewski’s mix of adventure and hard science. Author Barry Lopez of Arctic Dreams accompanied Mayewski and his crew twice to the Antarctica. Director/producer James Cameron featured him in the 2014 Emmy Award-winning Showtime, (and now Netflix), series “The Years of Living Dangerously,” which portrayed stories about catastrophic impacts of climate change on people and places. And the CBS news show “60 Minutes” showcased his climate change research several times on news stories.

“Climate change is a fast evolving field,” Mayewski said. “Not just the information but who [uses it] and how it is used.”

Natural and human-made climate change
“The world doesn’t just all get warmer at once,” Mayewski said. But a “dramatic change” of 8º F temperature increase in the eastern Arctic within one five-year period of the last 16 years “is equivalent to the fast climate change from the vestiges of the last ice age 11,500 years ago to modern climate.”

The increase of CO2 and methane in the atmosphere are what raises the global temperature, and are part of the “natural mechanism by which climate operates.” What points to humans’ effect on climate change is that the atmospheric CO2 level has risen 100 times faster in the past few decades than in the last 800,000 years, at least, Mayewski said. Also, the current level of toxic substances, such as lead and human-engineered chemicals in the atmosphere are “unparalleled.”

Lead levels, for example, have been well above natural levels for a couple of thousand years, at least in Europe, not just since the Industrial Revolution, he explained. The only time lead levels dropped to naturally occurring levels was after the Black Death plague in the 1340s, when 50 percent of the population died, which means that without human activity such as smelting and mining, lead levels should be close to zero in the atmosphere.

And while Antarctic ice shelves naturally break free from the weight of accumulated snow, “what’s different now is that the Antarctic is one of the fastest warming regions in the world,” Mayewski said, “[This] is the mechanism by which portions of the Antarctic will collapse into the ocean.”

The validity of scientific research on atmospheric CO2 and the human effect on climate change is believed by 99 percent of the climate change community, “but it only takes a couple of people to start a controversy,” Mayewski said.

Politics, policy and climate change
About 70 percent of Americans believe in climate change and humans’ involvement in it. While voices against this are louder today than a few years ago, Mayewski said that doesn’t mean more people deny climate change but that they have been empowered by the Executive Branch in Washington D.C. coming out as climate change deniers.

The U.S.’s decision to pull out of the Paris Agreement “was not based on science,” Mayewski continued. “The belief [in the climate change community] is that there’s a lot of special interests who don’t want to respond [to climate change]….[The President’s] being advised by people who have completely different agendas than looking at facts.”

“That said,” he added, “many [U.S.] high profile CEOs were in disagreement” with the decision to pull out of the Paris Agreement.

The immediate fallout from the U.S. stance on climate change, Mayewski said, is that scientists are leaving the U.S. for Canada and Europe. “The jobs just disappeared,” he said. “We’re going to lose a lot of good people.”

The Paris Agreement “was a remarkable step forward,” he continued, “and the U.S. was highly influential in making that work well.” Now, with the U.S. no longer part of climate talks, “we are going to get left behind.”

Big climate change deniers include the Heartland Institute, a climate change think-tank with a multi-million dollar budget used recently to print 200,000 textbooks sent to teachers across the county expounding the non-IPCC perspective.

The IPCC is the Intergovernmental Panel on Climate Change. The non-IPCC holds its report, “Climate Change Reconsidered,” as a legitimate alternative to the IPCC report. The IPCC report was compiled from thousands of peer-reviewed scientific papers by hundreds of authors, Mayewski said, while the NIPCC has barely 200 cited references, “any of which are taken out of context and just plain misused, and it is written by three people, all with ties to the Heartland Institute.”

“They really put their cards on the table,” Mayewski said. Based on misinformation, he called it “a piece of garbage,” and compares the two reports’ summaries in a 10 minute YouTube video that he said shows to non-scientists the NIPCC shortcomings, and the full reports in an hour-long video. Mayewski also noted how scientists, including himself, are quoted out of context by climate change deniers in media such as Breitbart News.

The future economy will be based on a response to climate change, Mayewski said, and “the Executive Branch of our government stepped away completely. The business community understands this.”

That said, Mayewski also noted that a change in the Executive Branch could quickly reverse the U.S. position and role, and its effect on science and economics. “The longer we wait, the hotter it’s going to be because we’re losing a lot of momentum.” 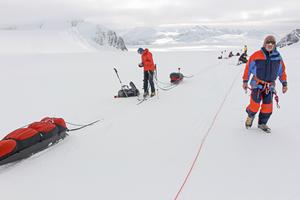 Paul Mayewski leads an expedition in 2015 to South Georgia Island to drill for ice cores. 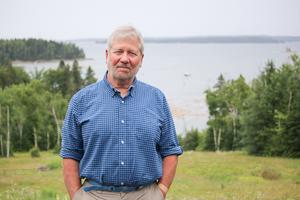 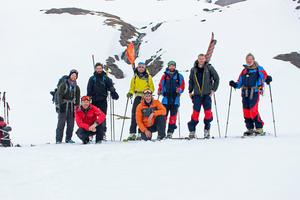 Paul Mayewski, at far right, stands with his 2015 research expedition crew in the remote regions of South Georgia Island.