Click here to see the full At the Helm . 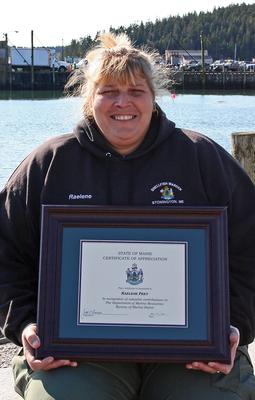 “The thing is, people don’t run from me,” says Raelene Pert of her job as clam warden. “Even when they don’t have a license.”

The job of shellfish warden involves going out to where clammers are working to see whether they have the proper license and legal size clams, and aren’t bringing in more clams than they’re allowed. While there are state laws regulating clamming, there are also local ordinances, drawn up town-by-town to meet local needs. Some towns don’t have ordinances—Deer Isle and Stonington do, and their goal is to preserve the health of the fisheries.

There have been a few times when it’s taken her a while to reach a clammer out on the flats, and the clammer waited patiently. “Most just ‘fess up’ and admit they don’t have a license,” she said. “For the most part, guys are good even if I’m there to write them a ticket.”

Pert was raised around commercial fisheries. “I’ve grown up around shellfish and lobstering my whole life,” she said. Her grandfather founded DeRaps Bait, which was then run by her uncle. She worked in the shop as a youngster, and dug for clams with her dad and sister.

It’s no surprise then, that she became clam warden in the Brooklin area in 1993. Well, no surprise that she applied, but Pert says it was a shock to her when she landed the job. She served 14 years as the shellfish warden in Brooklin, and has served as the shellfish warden for Deer Isle and Stonington since 2008. A few years ago, Pert became assistant harbormaster, and in 2013 when longtime harbormaster Steve Johnson retired, she applied for the job.

“I didn’t know before if I’d be able to do it,” she said. “But guess what? I’ve learned something new every day. I’ve had good teachers, including Dale Sprowl and several Marine Patrol officers.”

In her first year as harbormaster, a jet ski accident in the harbor offered one of her first major challenges. “The guy had a broken femur, and it was me and him at the end of the pier until the ambulance got there,” said Pert. “I’ll never forget it. He was going into shock, and I kept talking to him.” The man did survive the accident, and Pert got a crash course in the diverse incidents she would experience as harbormaster.

If she could wave a magic wand, she said she would love to see the pier lengthened, and more parking. “Then it wouldn’t be so hectic,” she said. “We’d have more room to spread out.”

One of her favorite memories from her jobs was from her early days as clam warden. “I was in the middle of Herrick’s Bay when I spotted someone,” she said. She got her skiff close and stepped out to talk to him.

“I took three or four steps and I was up to my waist in mud,” she said with a laugh. “I was trying to get some clamdigger who didn’t have a license, he even asked me if I needed help. I said no, of course, but he did help me. I had blood coming from everywhere—cuts all over. And you want to talk about sore? Those things burn and sting!

“That guy was so good. I wrote him a ticket and he still helped me. One of the guys at the [Atlantic] boatyard hosed me down in the yard when I got in,” she said.

“Another time I was out on Phoebe’s Foot, and the tide was coming in quick and I started to panic,” she said.

After those two incidents, she says, she learned to be patient. “They have to come in sometime,” said Pert. “And that’s when I get ’em.” 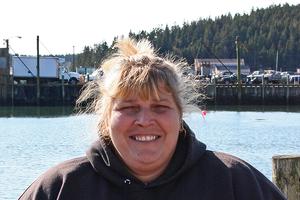