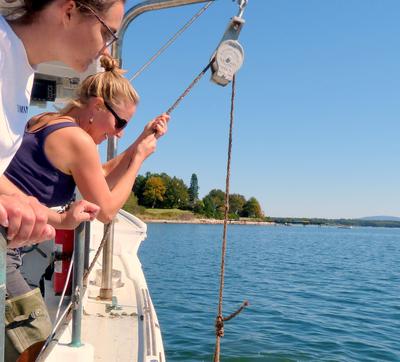 Researchers from the Marine Environmental Research Institute are spending a lot of time in Augusta these days. As the Maine Legislature ponders what to do about plastic trash—from tiny plastic microbeads in cosmetics to mounting plastic debris on the shoreline—the institute’s recent findings have put plastics sharply in focus, according to a news release from MERI.

It is estimated that eight million metric tons of plastic now pollute the world’s oceans. Over time, most of this plastic breaks down into tiny pieces invisible to the naked eye. Microbeads—the abrasives in certain toothpaste and skin products are a pervasive type of microplastic, too small to be captured in municipal wastewater treatment filters. Single use plastic bags are another major source.

In 2013 and 2014, the coastal monitoring team detected staggering amounts of microplastic fragments in Blue Hill and Penobscot bays—on average, 17 plastic fragments in every liter of seawater. Their findings took the researchers by surprise—no one expected to find that much plastic in “pristine” Maine waters, let alone amounts that were on par with those in heavily industrialized coastal areas such as the Baltic Sea, the release states.

Maine legislators were listening. On February 4, the state’s Environment and Natural Resources Committee heard testimony on “An Act To Prohibit Synthetic Plastic Microbeads in Personal Care Products and Over-the-counter Drugs.” The bill passed unanimously and became state law in March.

On March 23, the research team was called again to testify on three other bills now before the committee—legislation to tax single-use plastic bags, to improve their recycling, and to reduce plastic waste.

Are microplastics getting into Maine seafood?

MERI has recently taken up the seafood safety question.

In 2014, the team began analyzing microplastic fragments and toxic chemicals associated with them in Maine seafood items such as oysters and mussels. Not surprisingly, most marine species can mistake minute pieces of plastic in the water column for food.

Their preliminary findings of multiple fragments in bivalves from Blue Hill Bay led the team to undertake a much larger study this spring.

“We were involved earlier in addressing health concerns about contaminants in farmed salmon, in commercial fish stocks; so, this is familiar ground for us,” said Director/Senior Scientist Dr. Susan Shaw, who has led the institute’s research initiatives for 25 years.

MERI has been monitoring Maine coastal waters for over a decade. In addition to microplastics studies, this spring will find the research team at work combating the explosion of invasive green crabs that are eroding the coastline and decimating mussels and other Maine shellfish.

For more information about the Marine Environmental Research Institute and its programs, email info@meriresearch.org, call 374-2135 or visit meriresearch.org.