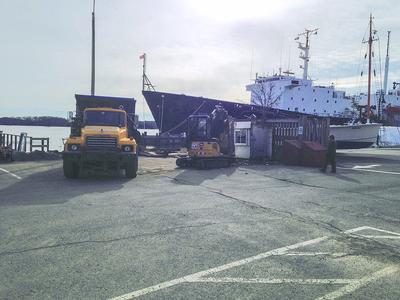 The Breeze, which stood for decades on the Castine waterfront, was removed on January 29, and later destroyed.

The Breeze—a familiar sight on the waterfront for decades—was removed on January 29 and later demolished, after negotiations failed between its owner and the nonprofit foundation assisting the couple awarded the ground lease for the business.

The building occupied land owned by the town and leased to business owners to operate the shorefront take-out stand.

Castine Community Partners, a nonprofit organization founded in 2011, seeks to raise $20,000 to build a structure as similar as possible to the one that once stood there. CCP will own the building and lease it at its discretion. Letters of solicitation will be mailed next week to about 150 people, said board member Lynn Parsons.

The foundation is partnering with Michael Rossney and Michele Levesque, who were awarded the three-year ground lease and will operate Dudley’s Refresher, offering traditional coastal Maine takeout fare—and fish tacos. The couple own Mexican restaurant El El Frijoles in Sargentville.

The lease proposal by Rossney and Levesque was submitted after CCP approached them to gauge their interest in taking over the ground lease and operation of The Breeze.

“We have had the good fortune to be approached by a group of citizens who were interested in facilitating the preservation of this once-great institution,” the proposal states.

CCP plans to lease the building to Rossney and Levesque and lend them funds to equip the building “as they see fit,” said Parsons.

Rossney and Levesque have signed a letter of intent to sign the ground lease by March 1, said Town Manager Jimmy Goodson.

The couple submitted a proposal for the ground lease in December 2014, as did former lessee Snow Logan of Penobscot, who had operated The Breeze for three years. Selectmen unanimously awarded Rossney and Levesque a three-year ground lease, beginning on January 1, and Logan was notified that the building must be removed, or sold, by January 31, 2015.

Town officials had expressed dissatisfaction with Logan’s operation since a long-running dispute over the cleanliness of the public restrooms. Her lease with the town included a provision for cleaning the restrooms; it was removed in 2014 and the rent for the ground lease was raised from $1,300 to $4,500.

Before the town awarded the new lease, it appeared that CCP believed it could purchase the existing building from Logan. The proposal from Rossney and Levesque stated: “It is our understanding that the current owner has responded favorably to the idea of a cash sale to the citizens consortium we are working with.”

However Logan’s attorney, Michael Harmon, said in a recent interview that “no one ever asked The Breeze if it was for sale.”

How negotiations fell apart—or failed to start—depends on whom is asked.

Harmon stated that the CCP offered $13,000—which Parsons confirmed, stating that was the town-assessed value of the building. “CCP was looking for some kind of counter offer,” said Parsons. “We never got anything in writing.”

According to Harmon, Logan paid around $50,000 for The Breeze and increased business by more than one-third. Her asking price started at $75,000.

Meanwhile, Rossney said he offered $8,000, a figure confirmed by Harmon, who stated that the sum didn’t cover the cost of the equipment.

Negotiations on all sides stalled at that point.

But The Breeze has not vanished. Logan, who said in a recent phone call that she “put my heart and soul into” The Breeze, plans to move it to the Castine Variety, which she operates, as a take-out window, complete with its original sign.

Goodson confirmed in a January 26 letter to Harmon that a takeout window will not change the usage of the Variety, and the sign conforms to town ordinances.

“All that will be required is a building permit,” Goodson wrote.