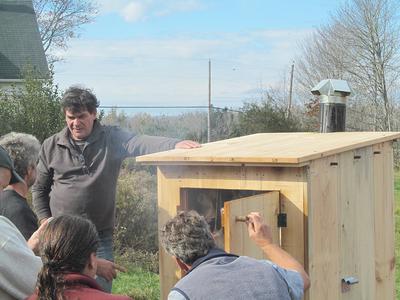 Chef and master butcher Brian Polcyn, who was the featured guest and presenter at the workshop, explains the steps in brining, curing and smoking meat at Peter Trowbridge’s farm in Brooksville.

The Island Culinary and Ecological Center sponsored a weekend workshop titled “Nose to Tail Butchering and Charcuterie,” which spanned three days and included events on two Brooksville farms and at a community kitchen on Deer Isle.

The workshop began with a humane on-farm slaughter demonstration on the afternoon of Saturday, October 25, at David’s Folly Farm in Brooksville. This session was led by Rob Cushman and Jake Hearst, who run a local animal processing service.

Later that day, the participants were treated to a dinner prepared by Devin Finigan, chef and owner of Aragosta restaurant in Stonington.

The group also ventured across the street to a farm owned by Peter Trowbridge—who had built a cold smoke house for flavoring and preserving meat—before carpooling to Bagaduce farm nearby, where owner Deborah Evans explained her breeding and feeding strategies for pigs.

The participants returned to David’s Folly for a lunch, and in the afternoon they were schooled by chef and master butcher Brian Polcyn on the American and Italian methods of nose-to-tail butchery before preparing a dinner together.

The show moved to Deer Isle on Monday, where Polcyn led the group in a hands-on, seven-hour study covering dry curing, sausage making, smoking fundamentals and other techniques for preparing meats.

Getting meat to market

John Altman, owner of David’s Folly Farm, shared some of the challenges of bringing animals to market.

Altman takes his animals to a butcher, because for meat to be sold to consumers it must be processed in a USDA-approved environment and deemed good for human consumption.

It takes a whole day to load the pigs onto a truck, and the slaughter and processing facility is two hours away, Altman said. It’s a time-consuming and expensive effort.

And it affects the animals and their meat negatively, too, according to Polcyn.

Polcyn said that commodity pork—which refers to pigs produced in large operations, where the animals live in tightly confined spaces—is raised in an unhealthy environment.

The pigs almost assuredly will become sick, so they are automatically given antibiotics as a matter of protocol, he said.

Polcyn and Altman agreed that the ideal conditions for producing meat from healthy animals are on the farm, where the animals’ quality of life is better, and they are not subjected to the stresses of relocation prior to being slaughtered.

Altman explained the importance of the type of services provided by Hearst and Cushman, and all agreed that a USDA-inspected mobile butchery vehicle would be the best set up, because the specifications required to perform butchery on-site to USDA regulations are more than small farmers can handle.

“[You] really have to be operating a butcher shop to satisfy USDA requirements,” Polcyn said.

He added, “The USDA is not the enemy” and cited the need for regulations.

But the USDA responds with what Polcyn called “blanket policies” that aren’t appropriate in all situations or for all farming paradigms.

Evans added that rules and regulations are designed around a “monocrop” system, in which mega-producers farm just one food item, and that the flexibility small farmers need isn’t accommodated; however, local food ordinances are a way for communities to send a message to government to reexamine regulations.

And change is needed. The group discussed food sovereignty and the importance of producing food locally.

Ingrid Bengis Palei explained that Maine used to export 95 percent of the food it produced, but now it imports 93 percent.

“Maine was the breadbasket of the northeast,” she said.

This was the second Nose to Tail Butchering Workshop put on by the Island Culinary and Ecological Center, the mission of which is to promote the use of local foods and to grow educational and job opportunities for young people in the culinary, ecology and hospitality fields, according to the organization’s website.

Bengis Palei, who founded the nonprofit organization on Deer Isle five years ago, was pleased with the turn out and participation.

“I had my doubts about whether we could do it a second year,” she said, but she noted that the level of interest seems to be increasing.

More than 30 people participated in the weekend’s events, including a number of people who returned for a second time around, like a chef and culinary teacher from the Art Institute of Philadelphia, Bengis Pelai said.

ICEC executive director Wes Norton summed up the session in an email, stating, “All participants left with a better understanding of how to take a pig and utilize it to feed themselves, their family, or their customers in a way that respects the animal, and is exciting and delicious to eat.”

He continued, “We are hoping to repeat the workshop again next year, as it has filled up both times we have offered it.” 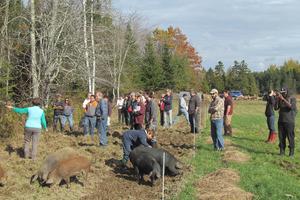 Deborah Evans took participants for a walking tour at Bagaduce Farm in Brooksville. 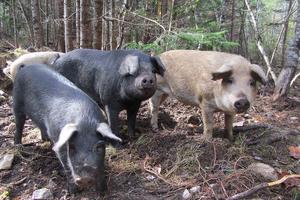 Pigs eat well, receiving a combination of feed and forage, at Bagaduce Farm in Brooksville. 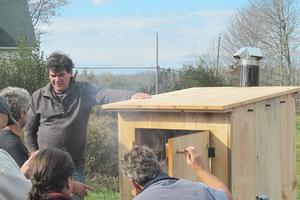 Chef and master butcher Brian Polcyn, who was the featured guest and presenter at the workshop, explains the steps in brining, curing and smoking meat at Peter Trowbridge’s farm in Brooksville.