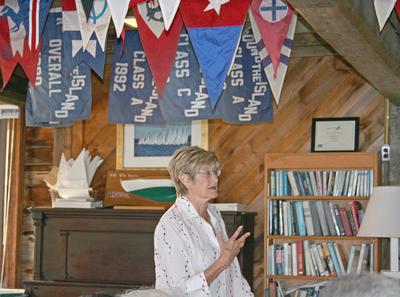 Dr. Susan Shaw, founder and executive director of the Marine Environmental Research Institute in Blue Hill, discusses the findings of a 10-year monitoring project of the Blue Hill Bay watershed. She was the featured speaker of the Friends of Blue Hill Bay annual meeting on July 29 at the Kollegewidgwok Yacht Club in Blue Hill.

Flowing from Swan’s Island to Blue Hill on the western side of Mount Desert Island, Blue Hill Bay stretches for about 14 miles. Its 407-square-mile watershed covers 287 miles of shoreline—home to 23 eagle nests, 27 “major” seal haul outs and shorebird nesting habitats—that empties into the Bay.

“The more we study the Bay the more we realize how little we know,” Dr. Susan Shaw said.

Shaw is the founder and executive director of the Marine Environmental Research Institute in Blue Hill, which has led a monitoring project of the bay since 2004. She spoke to the environmental organization Friends of Blue Hill Bay at the Kollegewidgwok Yacht Club on July 29.

MERI mapped the entire Blue Hill Bay watershed, Shaw said, encompassing 407.5 square miles of water, and 287 miles of shoreline that empty into the bay. The mapping was part of a monitoring project aimed at creating a baseline data set to be used for future monitoring and resource management.

In the 10 years of the monitoring project, the population of Hancock County has increased about 2 percent per year alongside water temperatures rising 1.3 degrees Celsius overall.

“We’re basically getting a warmer, wetter climate,” Shaw said. A wetter climate means greater storm water runoff from septic systems, wastewater treatment plants and pasture. The explosion of the green crab population is linked to the warmer temperatures, both locally and worldwide.

“They eat everything,” Shaw said, including mussels. “Mussel beds are just disappearing” from the Bay and, as bottom dwellers, green crabs also cause erosion by burrowing under shore grass.

MERI participated in a 2013 Department of Marine Resources green crab trapping study and, on one August day, Shaw said, 18,800 specimens were caught along 28 towns on the Maine coast. In Blue Hill, 10 traps caught 249 crabs over a 24-hour period. “Trapping them is a pretty good solution,” said Shaw, who welcomed volunteers to help with ongoing green crab trapping by MERI. “I think we’re going to know more by the end of the summer.” A benefit of warmer temperatures, she added, is an increase in chlorophyll in the water.

The monitoring project also sampled water for bacteria, “which spikes over acceptable levels after rainfall,” especially fecal indicators like enterococcus bacteria, the presence of which led to the closing of the Blue Hill Town Park beach in 2006.

Overboard septic discharge tanks used by cottages along Parker Point Road, that are “grandfathered” in with current septic discharge regulations, can rust and leak, Shaw said. One leaking pipe caused the 2006 beach closure. MERI staff “followed the bacteria up the stream” and found its source.

But before the discovery of the bacteria, its source and the fix to the septic tank, “hundreds of children were swimming there,” Shaw said, and going to the [Blue Hill Memorial] hospital with “non-specified symptoms.” MERI alerted the hospital to the possibility that fecal bacteria was the cause.

MERI also monitors the phytoplankton Alexandrium, the algae called “red tide” when its presence multiplies to toxic levels and can cause paralytic shellfish poisoning. Red tide was “widespread” in the Bay in 2005-2009 and caused shore closures and the loss of shellfish harvesting.

Finally, Shaw discussed the presence of microplastics and harmful chemicals like PCBs and brominated flame retardants (BFRs) in the Bay. PCBs, “very stable chemicals that can’t be broken down,” are found in the fatty tissue of seals, who are “at the top of the food web,” said Shaw. “It was just astounding the levels [of PCBs and BFRs] we’re finding in harbor seals.” Seals eat a variety of fish, including herring, mackerel and flounder. “These are the fish we’re eating,” said Shaw. “[Seals] are really telling us what’s building up in the fatty tissue of humans.”