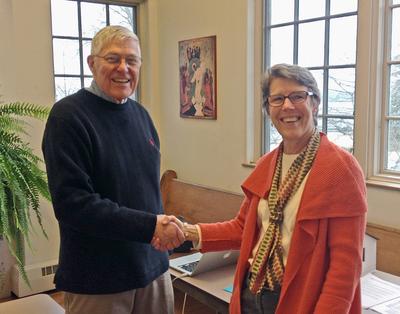 Maynard Forbes, Board President of The Conservation Trust of Brooksville, Castine and Penobscot shakes hands with Mary Barnes, Board President of the Blue Hill Heritage Trust, after the merger resolutions to join the two Maine land trusts were approved by a quorum of TCT members on March 31, 2014.

On March 31, 35 members of The Conservation Trust of Brooksville, Castine and Penobscot voted to merge with Blue Hill Heritage Trust.

The meeting was held at the Trinity Episcopal Church in Castine, and was the official sanction of a decision that had been in the works for several years.

“This was the last step,” said BHHT Executive Director Jim Dow by telephone the following day.

Started over 35 years ago, TCT acquired 15 properties and 19 easements throughout Castine, Brooksville and Penobscot.

Maynard Forbers, TCT board president, gave tribute at the meeting to the trust’s founders, speaking of the merge as “another step forward.”

Speaking in December, when the merger was first announced, Forbes noted that for a volunteer board, managing the properties “was more than we could handle.”

The Conservation Trust properties of Dunc’s Meadow, Greenbie Natural Area and the wetland parcel at its north end, and Hatch Cove Preserve in Castine; the Weinland Nature Study Area and Sherm Perkins Park in Penobscot; and the Snow Natural Area and Ferry Landing in Brooksville have been transferred to the Blue Hill Heritage Trust as part of the merger.

The Renée Henderson Natural Area in Castine and other TCT holdings will be assumed by Maine Coast Heritage Trust.

“That was based on their location and what made sense,” said Dow.

At least two positions on the BHHT board will be filled by former TCT board members, Dow said.

“There’s still a lot more to do. We have to integrate the organizations,” he said.

Dow traveled to Augusta on April 1 to file the necessary documents with the secretary of state and the registry of deeds.

“From a legal point of view, we are one, as of last night,” he said. “Everyone was very pleased.”