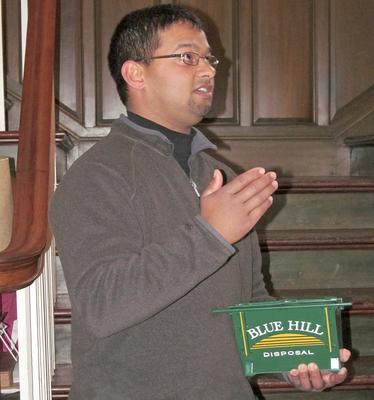 In 1977, “the day I got my license,” Vaughn Leach began the business that would come to be known as Blue Hill Disposal. With a fairly rusty Dodge pickup that already had 300,000 miles, Leach, still a senior in high school, began building the business one trash bag at a time.

For 37 years, Leach, and then in partnership with his wife Melanie, continued to grow the business, eventually expanding throughout the Blue Hill peninsula. More than 300 customers line the various Blue Hill Disposal trash routes, and that number brought the business to a tipping point, said Leach in a recent interview. “It got to the point where I would have needed to hire employees, and I wasn’t sure that was what I wanted to do,” he said.

Around Christmas time, said Leach, he was approached by Josh Gray of Brooklin who decided to hang up his Grundens and expand a small trash route Gray’s family has maintained for many years. Gray sold his lobster boat, all his traps and gear and began a three-month negotiation with the Leaches to purchase Blue Hill Disposal.

Since January 1, Gray has worked the various routes with Vaughn and Melanie, giving him the opportunity “to learn how to do things the right way,” said Leach, noting that when he began the business he often figured out the best way to do things through trial and error, “or because I broke something.”

Gray got all the appropriate licenses and then letters were sent to all 300 Blue Hill Disposal customers and the 100 customers Gray already had, telling them of the change in ownership. The letter also invited them to a party on March 30.

The party gave the disposal company a chance to thank its existing customers, serve as a farewell for the Leaches and introduce Gray to the community. “I have big shoes to fill and I know that,” said Gray. “I hope to provide the same level of service the customers are used to.”

Gray said there is nothing much that will change about the way the business operates, except for the fact it will now be located in Brooklin rather than Blue Hill. The phone number will change, he said, and the name will now be Blue Hill Disposal, LLC. The new phone number is 359-2090.

Melanie Leach will continue to keep the books for the company and hopes to even pick up a few more bookwork accounts from local businesses to fill her days.

Vaughn Leach will still keep the large container business, providing 10-, 15- and 20-cubic yard roll-off containers to individuals and small businesses. He has named the new venture BHD Containers. He said he will also direct more time to the office of selectman that he currently holds and enjoy some of the free time he now anticipates having. “The trash business is complex and there was a high level of commitment that was needed,” he said. “I will look forward to having some free time.”

As a parting gift, the Leaches gave Gray a miniature dumpster with the Blue Hill Disposal logo, filled with something they said was essential to his business going forward: dog bones. 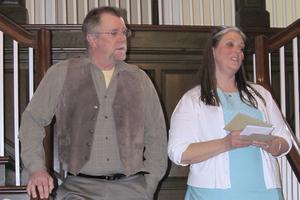 After 37 years operating Blue Hill Disposal in Maine, Vaughn and Melanie Leach said goodbye to their customers at a reception held Sunday, March 30, 2014. 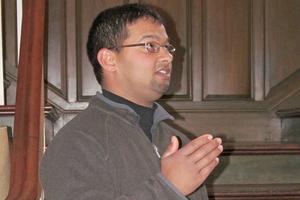