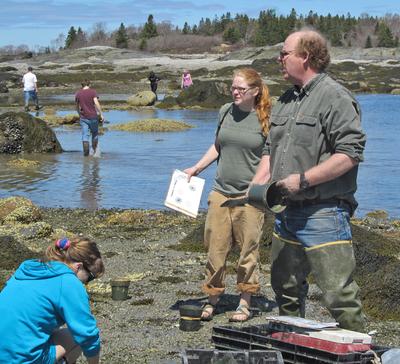 Professor Brian Beal, at far right, gives directions to students from the high school about how to carry out the research project examining the likelihood of clam survival and growth under various conditions.

Anyone driving over the causeway on Friday, May 3, near low tide likely would have seen more than a dozen high school students all over the clam flats, participating in a research experiment. The hands-on science work is a precursor to the Marine Studies Pathway that will launch at the high school next year and will teach a wide ranging curricula based on marine studies.

Brian Beal, professor of Marine Ecology at University of Maine at Machias, led the research effort, which was sponsored by the Marine Environmental Research Institute in Blue Hill. Beal said the overall goal of the project is to learn about how clams grow on either side of the Deer Isle Causeway.

Within that project, there are multiple other variables studied. For instance, the study asks how clams grow at different tidal heights and how they are impacted by predators, continued Beal.

The project includes students seeding clams ranging from 5/8 of an inch to 1/4 of an inch at high tide and low tide, and some within a bucket with a screen to keep out crabs and other predators.

Beal said the thing about clams is that they are more plentiful but smaller closer to the higher tide marks—conceivably because there is less time for predators to get at them. On the other hand, there are fewer clams at lower tide marks (because they are easier prey) but clams grow much faster at lower tide marks, because of the water.

Beal and the students will return to check on the clams in late October or early November, when 90 to 95 percent of the yearly growth cycle is complete.

Beal said the major question will be how well clams grow comparatively on each side of the causeway. “The [northern/Reach] side is much more rocky; it’s definitely a different habitat [than the southern/Penobscot Bay side],” said Beal.

Beal has been involved in increasing K-12 marine science curriculum. As he sees it, it is “waste to ignore what’s sitting underneath our noses” by ignoring the rich history and science in the marine environment. 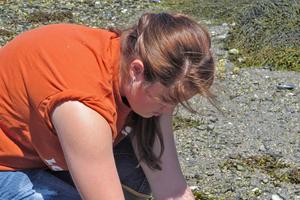 Professor Brian Beal, at far right, gives directions to students from the high school about how to carry out the research project examining the likelihood of clam survival and growth under various conditions.