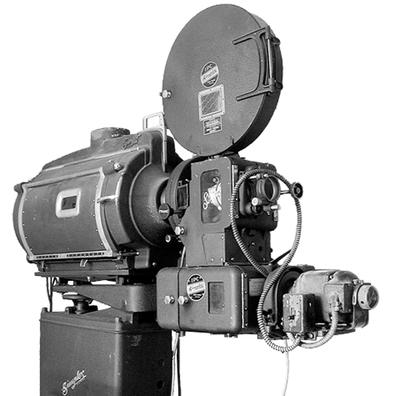 The 1941 Super Simplex 35mm film projector in use at the Stonington Opera House through Sunday, March 24. The new Digital Cinema system will go live Friday, March 29. To celebrate, OHA is planning special events and contests for March 24 and the weekend of March 29.

On Friday, March 29, after 95 years of running 35mm movies, Opera House Arts will present its first movie in true digital cinema. To celebrate this milestone, on Sunday, March 24, at 3:30 p.m. OHA will host a tea tasting and farewell celebration for its 1941 Simplex film projectors. The tea tasting will be provided by a new Stonington company, Tempest in a Teapot, and will give attendees to the last 35mm showing (Dustin Hoffman’s new film, Quartet) an opportunity to taste five of the company’s locally, custom-blended teas. OHA will also be offering special drawings and prizes for attendees during its first weekend of digital cinema.

The first movie to be presented in this new format will be the Walt Disney company’s current box office hit, Oz, The Great and Powerful. The Stonington Opera House began showing silent films in 1918 and, except for periods between 1964 and 1999 when the theater fell into disuse, has shown new, first-run films on 35mm projectors continually since that time, according to a news release. When Opera House Arts purchased the building in 1999, it restored and upgraded the most recent set of projectors, 1941 Super Simplex.

OHA held a special fundraising campaign in July 2012 to convert to digital cinema. The Suzanne and Joe Rares Digital Cinema Fund was established with thanks to lead gifts from the Rares and from Tom and Valerie Wolzien, and with the help of many local movie goers was completed by summer’s end, allowing OHA to begin purchase of and installation plans for the necessary equipment.