A photograph of the bridge under construction, ready for the steel cables, in late summer of 1938.

For nearly 150 years, the communities on Deer Isle traveled to the mainland by ferry, first under the power of wind, then steam.

The “big city” Stonington residents traveled to for shopping or business was Rockland, only 20 miles by sea. Today, a trip to Rockland is 80 miles by road, traveling over the Deer Isle-Sedgwick Bridge. That bridge will turn 75 next year, and the Island Ad-Vantages will celebrate that anniversary over the next year by sharing stories, information and photographs with its readers about the plans for, construction of and uses of the bridge.

Where it all started

In the mid-1920s, a movement began on the island to seek improved ferry service. Island resident Percy Clarke wrote a letter to the editor in the Deer Isle-based weekly newspaper The Messenger that said, in part, “much attention has already been given to good roads and golf links are assured; private interest have visioned our possibilities and hotels are being built and large acreage of shore property is being acquired; yet, we are still at sea.” Clarke advocated for a “serviceable and efficient ferry.”

It wasn’t until the Great Depression, and the founding of the Public Works Administration in 1933 and the Works Progress Administration in 1935, that federal funding became more available. If state or federal funding had been available to improve ferry service in the mid-1920s, the bridge might have been delayed by many years, according to Clayton Gross’ book Steel Over Eggemoggin.

Resident Alex McGuffie wrote a letter to the editor which ran in the Portland Press Herald in April of 1932. McGuffie described Deer Isle as the second largest island on the coast of Maine, with “two towns on it and an auto for almost every person here,” and likened the ferry operator to a jailer. “Here is a chance for the State of Maine to put a lot of the unemployed to work and give us what we ought to have at the same time. We want a bridge!” wrote McGuffie.

This was one of the first public calls for a bridge, and the following summer in 1933 the Lions Club of Stonington held a field day and invited local representatives and politicians of note, including then-governor Louis Brann and U.S. Representatives John Utterback and Edward Moran. It was then that members of the Deer Isle and Stonington communities formed the Bridge District.

The Deer Isle-Stonington Press ran an impassioned editorial in late 1933, urging people to contact local representatives to vote for a bridge project. “It is high noon for the Bridge Project! Strike now! Get the bridge now, or wait, possibly for generations,” read the editorial. “The State wants it, the people need it. The federal government has the authority to grant it, the funds to build it, and the desire to help. Labor is abundant, cheap, and eager for employment…Don’t delay! Strike now!”

Unfortunately for those in favor of the bridge, it would take four more years of petitioning the state and federal government before funds would be secured for the bridge, and then another year and a half to construct the bridge.

Efforts for the construction of the bridge were led by Frank McGuire (who was later called the “Father of the Bridge”) and other locals. McGuire pushed the PWA to approve the project, stressing to PWA representative James Shea in 1933 that absence of a bridge had a “crippling influence on the island.”

In 1935, a statewide vote was held to approve funding for the project. State voters “overwhelmingly approved” the project, according to Gross, but when the PWA list of projects was released later that year, a bridge for Deer Isle was not on the list.

This may have been a moment of celebration for those in favor of the bridge, but it took almost a year and a half of red tape—sending out the project to bid, trying to find WPA-approved laborers, needing the legislature to up the bond approval as costs began to escalate, and applying for deadline extensions—before a suitable bid was finally accepted and approved by the PWA on December 15, 1937. In the meantime, a bill was passed in early 1937 that stated no ferry could operate in competition with the bridge once it was built. An 11th-hour effort by a former state senator from Skowhegan and critic of the bridge effort, Blin Page, failed to kill the project.

Construction began in earnest in February of 1938. The bridge was finished and formally opened at a dedication celebration on June 19, 1939.

In the end, the bridge effort had more lives than a cat. “Sixteen times it had been considered dead and revived,” wrote Gross in Steel Over Eggemoggin. 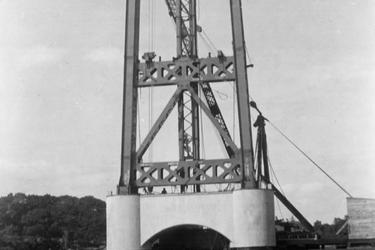 The Mainland side tower being raised on finished piers and base in summer of 1938. 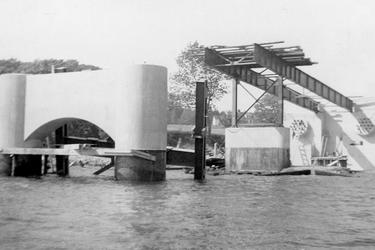 The bridge piers under construction in July of 1938. 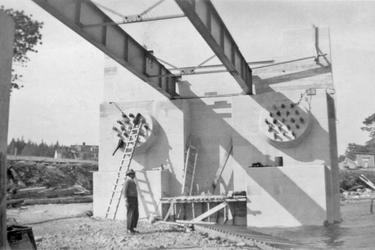 This June 1938 photo shows Sedgwick-side anchorage shows where cables would be anchored to the concrete structure. 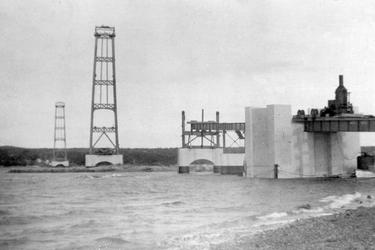 A photograph of the bridge under construction, ready for the steel cables, in late summer of 1938.